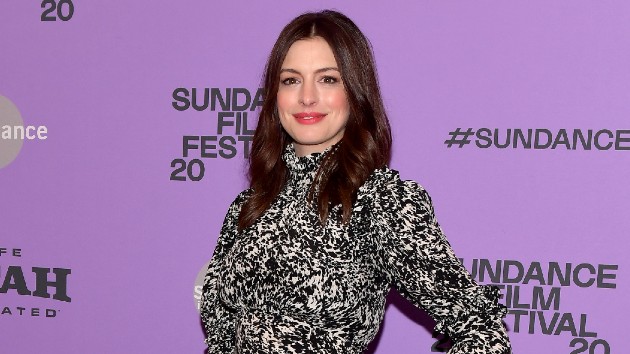 (NEW YORK) — It’s been nearly a year since Anne Hathaway gave birth to her second child, however, The Witches actress revealed on Monday what she named her son.

Hathaway, who was a guest on Monday’s episode on Live With Kelly and Ryan opened up about filming her newest movie and why it was so special for her, because she was pregnant with little Jack.

“I have a beautiful almost-11-month-old boy, but I was pregnant when I made The Witches, so technically he’s all over that performance,” the 37-year-old actress smiled before diving into how she kept that secret under wraps from the rest of the cast and crew.

It was then the actress revealed what she and husband Adam Shulman — whom she already shares four-year-old Jonathan with — named their baby boy.

Noting how much Jonathan adores his little brother, Hathaway revealed, “Now Jack’s big enough to wrestle with, and that’s brought a new element to their relationship that’s really cute.”

Hathaway also revealed that she found out she was pregnant shortly before her first fitting with costume designer Joanna Johnston, which forced her to come up with some elaborate excuses to wiggle out of wearing tight-fitting clothes during filming.

“[Johnston] goes, ‘I really want you to have a really tight waist,’ and I had just found out that I was pregnant and I was like, ‘Mmm, no. No, I don’t think so. No,"” the Interstellar star recounted. “She was like, ‘Well, why?’ And I was like, ‘Eh, you know, I just know myself.’ I’m scrambling for a reason.”

Eventually, Hathaway managed to finagle a believable excuse that she wouldn’t be “as free” in restrictive clothing, so it was best to “make everything loose.”

The Witches is now available for streaming on HBO Max.

Why millions don’t trust the election results, despite no evidence of widespread fraud: Experts
American Music Awards 2020: Taylor Swift, the Weeknd and Dan + Shay are this year’s big winners
More than 1 million people traveled by plane in the US in one day, despite CDC COVID-19 guidelines
Rain, snow and ice for parts of Midwest to the East Coast
Biden’s 1st cabinet picks coming on Tuesday: Incoming WH chief of staff
How activists are navigating the US immigration system