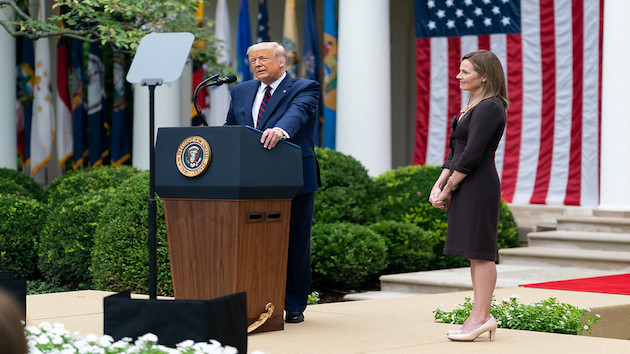 Supreme Court justices are required to take two oaths before they may execute the duties of their appointed office: the constitutional oath and the judicial oath. Recent tradition holds that at least one of the oaths is taken at the court itself.

Earlier Monday, President Donald Trump said the White House would “probably” host an event “later on this evening” if Barrett is confirmed.

Murkowski had initially opposed moving a nominee so close to the election, saying “fair is fair” given that her own party had blockaded President Barack Obama’s pick in 2016 to replace the late Justice Antonin Scalia eight months before the election, but with Republicans securing the necessary votes for confirmation, Murkowski has changed course.

That move left Collins alone among the GOP opposition expected to vote against Barrett on Monday. Collins is in an extremely difficult fight for reelection in a moderate state where she has been lambasted for her past support of conservative jurists, including Trump’s highly contentious nominee, Justice Brett Kavanaugh.

The Senate floor vote is expected to take place about 7:30 p.m.