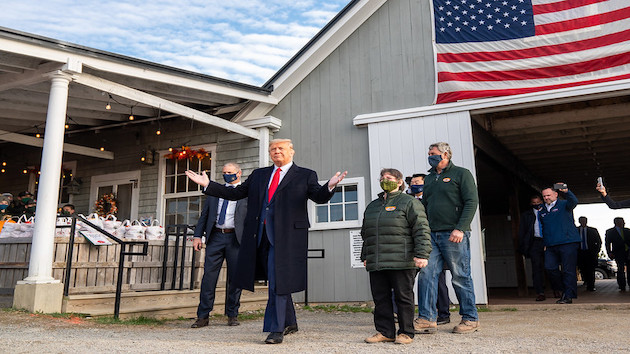 (WASHINGTON) — With eight days until Election Day, President Donald Trump and Vice President Mike Pence are charging full steam ahead with a breakneck campaign schedule that has them criss-crossing the country with large-scale events in critical battleground states and defiant in their handling of the coronavirus pandemic despite another White House outbreak and a climbing national case count.

Stumping Monday in the critical state of Pennsylvania that he captured in his surprise victory upset four years ago and needs to win again, Trump argued he is sick of all the focus on the pandemic that has killed some 225,000 Americans in the final stretch of the campaign.

“We’re rounding the turn. You know, all they want to talk about is COVID. By the way, on November 4th you won’t be hearing so much about it. COVID, COVID, COVID, COVID,” Trump said at the first of three rallies in the state.

The vice president, meanwhile, flew to Minnesota to rally supporters despite having been in close contact in recent days to his chief of staff Marc Short, who tested positive for the virus over the weekend and is one of five members of Pence’s orbit to come down with the virus in recent days.

Despite being the leader of the White House Coronavirus Task Force, the vice president disregarded C.D.C. guidelines recommending a 14-day quarantine if you have been in close contact with a person who has the virus. Instead, a spokesman justified the uninterrupted schedule by saying it is in “accordance with the C.D.C. guidelines for essential personnel.”

In addition to his trip to Minnesota Monday, Pence is scheduled to campaign in North Carolina and South Carolina on Tuesday, and then travels to Wisconsin and Michigan on Wednesday.

The vice president has tested negative every day since Short’s positive diagnosis, including Monday.

In addition to his full campaign schedule, the vice president had said on Sunday he would also preside over the final confirmation vote for Supreme Court nominee Amy Coney Barrett, expected to happen Monday evening. But after the news sparked backlash on Capitol Hill, sources said the vice president was not expected to attend.

It was not clear if Pence would attend a ceremonial swearing-in that President Trump said he may host at the White House later in the evening following the vote.

President Trump defended the possible event, which has not been officially added to the White House schedule, to reporters on Monday, saying it would not be large and would be held outdoors. But the prospect of another event surrounding the nomination raised eyebrows, since multiple infections, including possibly the president’s, resulted in connection to the prior event in the judge’s honor last month.

As the national numbers and breakouts within the ranks of the administration have proven the White House does not have the virus under control, White House chief of staff Mark Meadows conceded as much in an interview on Sunday.

Vice President Joe Biden seized on Meadows comments as evidence that the administration has given up in trying to contain the pandemic that has killed some 225 thousand Americans,

“This wasn’t a slip by Meadows, it was a candid acknowledgement of what President Trump’s strategy has clearly been from the beginning of this crisis: to wave the white flag of defeat and hope that by ignoring it, the virus would simply go away. It hasn’t, and it won’t,” Biden said in a statement.

Meadows sought to clarify his comments on Monday, mocking Biden for wearing a mask in the process.

“The only person waving a white flag along with his white mask is Joe Biden. We’re going to defeat the virus, we’re not going to control it, we’re going to try to contain it as best we can,” said Meadows.

Asked about Meadows’ comments Monday, President Trump disputed that he had given up.

Even as the president continues to insist that the U.S. is “rounding the corner,” cases are on the rise nationally as experts say the United States is now in a new wave of the virus.