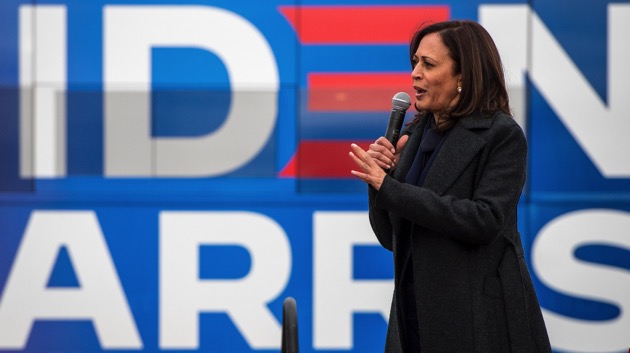 (NEW YORK) — Sen. Kamala Harris responded to attacks and slights she’s endured from President Donald Trump, including mispronouncing her name and referring to her as a “female socialist,” during an interview with ABC’s The View.

“It’s so predictable coming from him. I mean it’s childish, it’s name-calling on behalf of the president of the United States, and, again, the American people deserve so much more from their president,” said Harris. “You know, look, the name-calling is not new to me — it’s not new to anybody who played on the playground as a child. But this is not the playground.”

Harris, the Democratic vice presidential nominee and the first woman of color on a presidential ticket, has been on the campaign trail in battleground states urging voters to cast their ballots early. She has been the target of attacks from the right. Trump and others, including Sen. David Perdue, R-Ga., have deliberately mispronounced and mocked her name. On Friday, Trump referred to Harris as a “female socialist,” and said she could never be president.

Harris told ABC News in response, “Joe Biden and I are proud American patriots and the reality is that the values that we have I think are shared by the majority of the American people.”

“This is the greatest failure of any presidential administration in the history of America,” said Harris to reporters in Detroit. Later adding, “This administration fails to take personal responsibility, or responsibility in terms of leading the nation through this dangerous and deadly mass casualty event and that’s why they have forfeited their right to a second term in office.”

Harris had to temporarily suspend her campaign travel after her communications director, Liz Allen, tested positive for COVID-19. When asked if Vice President Mike Pence should suspend travel after five of his aides have tested positive, Harris said, “He should be following the guidelines. We’re doing it. I think we have modeled the right and good behavior and they should take our lead.”

This week, Harris will campaign in western states. The campaign has announced that Harris will travel to Nevada and according to a source familiar with plans Harris will be in Texas on Friday. Texas currently leads the nation with the largest number of early votes. The Texas-sized total as of Sunday is 7.2 million — already 80% of the state’s entire 2016 vote.