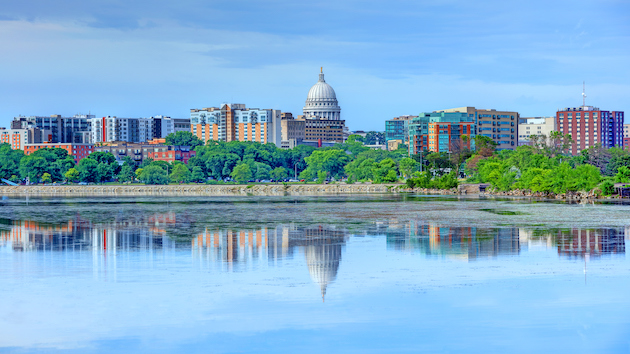 (NEW YORK) — It’s been over a month since Joe Biden has been to Wisconsin — a key swing state that critics say Hillary Clinton lost because she didn’t pour enough time or resources into it. But that will change on Friday, when Biden plans to return to the state for the third time — just eight days ahead of Election Day.

He broke the news of his trip after his rally in Pennsylvania Monday afternoon, when a reporter asked if his light travel schedule reflected a sense of complacency.

“You know me, I am not overconfident about anything,” Biden said, though he added that he thinks he’s “gonna win” the state.

But contrary to 2016, when Democrats on the ground in Wisconsin complained of waning enthusiasm and attention, local officials this time around agreed with Biden. Overconfidence isn’t a problem this cycle, they said.

For one, enthusiasm is “grapes to watermelons” compared to 2016 because of the anti-Trump energy, said Democratic Party of Wisconsin Chair Ben Wikler. “Right now, it is like a volcano erupting of grassroots energy. And you can see everywhere you drive around. The contrast between Clinton signs in 2016 and Biden Harris signs in 2020… could not be more stark.”

“In 2016, if you talk to Wisconsinites, there was this sense that the state was being ignored, that we weren’t getting the resources that we needed, that volunteers weren’t showing up for shifts because they felt like it was in the bag. That is not happening even remotely [this year],” Wikler said.

And a Democratic official from Milwaukee, a heavily blue city where turnout crashed and burned for Clinton in 2016, said the Biden campaign has been a lot more interactive and easier to talk to than the Clinton campaign was. Biden is regularly in touch with the campaign, the official said.

But Democrats also said the main reason they haven’t been clamoring for more in-person visits from the 77-year-old nominee is because Wisconsin is experiencing a huge coronavirus surge.

It’s ranked as the fourth highest state in the country for cases per 100,000 people over the last week, just behind the Dakotas and Montana, per the New York Times.

And besides the risk to Biden himself, for a campaign that has consistently amplified the contrast between its adherence to public health guidelines and President Donald Trump’s rapid-fire, largely maskless rallies, there’s a political message in staying home.

“If the situation were different, I would love to have a series of final visits, I’d love to have a series of rallies, but this is a lethal pandemic we’re talking about in the Badger State,” Wikler said. “Trump is pretending it’s not happening and Biden and Harris are acknowledging the reality, listening to the scientists and experts and doing everything we can to turn out voters without putting people at risk.”

Of course, that message grows slightly murkier now that Biden has announced his Friday visit, though his events have been markedly different from Trump events, consistently requiring social distancing and masks.

Wikler also noted that Biden has already out-visited Clinton during the 2016 cycle, when she notoriously didn’t make a single trip to the state. Then-Democratic vice presidential nominee Tim Kaine did, however, as well as other surrogates.

Biden has visited Wisconsin twice, and held a few virtual events there. He would’ve been there three times already, had the Democratic National Convention — which was supposed to be held in Milwaukee in an effort to show the state where its priorities lie — not been switched to an all-virtual event. Since then, Biden has been to Kenosha, where he visited Jacob Blake’s family following his shooting by local police. Kenosha County went for Trump in 2016 by the tightest margin in the whole state, just 255 votes and 0.33 percentage points.

Biden also visited Manitowoc, a city outside Green Bay that relies heavily on manufacturing work. Trump won the county handily in 2016, but Biden hopes to win over votes with criticism of Trump’s China trade war.

Harris has been there once — it was her first campaign stop after being nominated — and has held one virtual rally there, on her birthday. On her visit, she too met with Blake’s family and then toured Black businesses in Milwaukee.

“Biden and Harris both prioritized visiting Wisconsin once the general election was underway, and it was so vital to have their presence here,” Wikler said.

At this point in the race, Wisconsin voters have already cast 45% of the total votes cast in 2016, a number that’s expected to grow by Friday. But there are still over 2 million registered voters in the state who haven’t voted. Biden carries a consistent but narrow lead in polls, according to FiveThirtyEight’s poll tracker.

Democratic Lt. Gov. Mandela Barnes, who endorsed Biden back in July and is regularly in touch with the campaign, has been shouting from the rooftops since 2016 about the risk of sleeping on Wisconsin. At a virtual rally with Harris last week, he warned that “we know that this is going to be a close election.”

But like Wikler, even Barnes told ABC News earlier Monday that he didn’t think it was necessary for Biden to visit the state again. In fact, Barnes said he didn’t think Biden needed to visit at all before Nov. 3.

“I don’t necessarily think he needs to. He and his campaign have had a strong presence here and given the damage that COVID-19 has inflicted on our state, I think voters will appreciate the candidate that takes this seriously,” Barnes said in a text message before Biden announced the visit.

Of course, Democrats could change their tune after the election results come in and exit polls show who they did and didn’t reach.

But each Democrat was quick to point out that they’re not taking anything for granted. The Trump campaign, after all, has undoubtedly been working hard for the state, pushing into the gap left open in 2016, and has been on the ground for over a year knocking doors and coordinating grassroots volunteers.

“The most critical thing is for every Democrat to not take a lead in the polls for granted. You just, in Wisconsin, you cannot sleep on an election. There are so many times when Republican turnout has surged right at the end. Democrats need to pour every ounce every minute of their energy into this race, until the closing buzzer,” Wikler said.