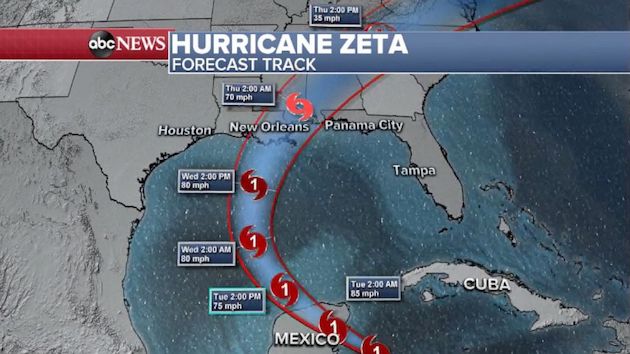 (NEW YORK) — Hurricane Zeta strengthened as it made its way toward Mexico’s Yucatan Peninsula on Monday, and is set to make landfall along the Louisiana coast later this week.

Zeta strengthened into a hurricane on Monday and is expected to make landfall along the northern Gulf Coast by Wednesday, according to the National Weather Service. The hurricane was moving northwest at about 10 mph with its eye located about 90 miles southeast of Cozumel, Mexico. It had maximum winds of about 80 mph as of Monday evening.

The hurricane is forecast to bring strong winds and a “dangerous storm surge” to portions of the Yucatan Peninsula, according to the National Weather service. Coastal areas along the Northern Gulf Coast were placed under hurricane and storm surge watches, and Louisiana, Florida and Alabama were given warnings, the NWS said Monday, noting threats of coastal flooding, heavy rain and possible tornadoes.

Louisiana declared a state of emergency in anticipation of the storm Monday night. Louisiana Gov. John Edwards said he issued the order despite uncertainty surrounding the storm’s final path and urged residents to follow the guidelines.

“While there is some uncertainty in Zeta’s track, it is likely that Louisiana will see some impacts from this storm, and the people of our state need to take it seriously. It’s easy to let your guard down late in the hurricane season, but that would be a huge mistake,” Edwards said.

He said state officials were already assisting local authorities with “critical items like pumps, generators and food and water” for first responders.

“We stand ready to expand that assistance as needed,” Edwards said in a statement. “Everyone should be monitoring the news for information and should heed any direction they get from their local leaders.”

A storm surge watch is in effect in several areas between Intracoastal City, Louisiana and Navarre, Florida, including Lake Pontchartrain, Pensacola Bay and Mobile Bay.

A hurricane watch is in effect from Morgan City, Louisiana, to the Mississippi/Alabama border, putting residents in areas like Lake Maurepas and metropolitan New Orleans on alert.

The storm also triggered several tropical storm watches from the Mississippi/Alabama border to the Okaloosa/Walton County Line in Florida, and from west of Morgan City, Louisiana, to Intracoastal City, Louisiana.

The NWS said residents in and around those areas should monitor the storm closely, as the agency will likely issue additional hurricane and storm surge watches as Zeta progresses.

Zeta is forecast to make landfall along Louisiana’s northern coast Wednesday night. Meteorologist said the storm could decrease in strength by that time, but it’s expected to be at or near hurricane strength at the time of landfall.

It’s expected to bring heavy rainfall across the Yucatan Peninsula of Mexico, the Cayman Islands and central to western Cuba through Tuesday, causing flash floods in some urban areas.

Portions of the central U.S. Gulf Coast, the southern Appalachians and some Mid-Atlantic states will likely experience heavy rain as well between late Tuesday and Thursday, according to the NWS.