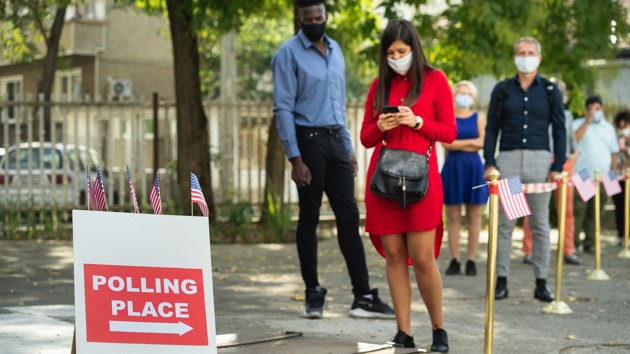 (ATLANTA) — Friday is the last day of early voting in Georgia, and Secretary of State Brad Raffensperger’s didn’t mince words with his message to voters going into this final week: “Expect lines — long lines.”

“The counties are doing their best. You will see lines. We ask those that are in them to be patient, patient with your poll workers. Many are volunteering for the first time,” Raffensperger said during a news conference Monday.

The state has seen record early voting turnout: 2.8 million Georgians have already cast their ballots, Raffensperger said. Nearly 1.8 million of those votes were during in person early voting.

According to the University of Florida’s Michael McDonald, that 2.8 million number is about two thirds of 2016’s total turnout — and the final week of early voting is historically the busiest.

At the start of early voting, there was a bandwidth issue poll workers experienced while checking in voters, leading to long lines across the state, but especially in the most populated metro areas. That issue has been addressed, the secretary has said, but given this week could see the highest turnout, he was asked if he was confident the same issues wouldn’t arise.

“This week, depending on where it is, we feel like we’re in good shape, but we are expecting large numbers,” Raffensperger said.

Raffensperger was optimistic last week about when Georgia election officials would be done counting ballots, and he echoed that again Monday morning, noting an emergency rule passed by the State Election Board that allowed counties a jump-start on processing absentee ballots.

He predicted Georgia would “get you the results, a lot sooner than many other states.”

As he has done before, the secretary blasted critics who “cry voter suppression” while also seeking to assuage fears over “ballot integrity.”

“Securing the integrity of the ballot is one of my top priorities. We have many protections in place,” he said. “You need to show your ID to vote. We have citizenship checks through the REAL ID process in our partnership with the Department of Driver Services.”

He continued, “We have others that cry voter suppression here in the middle of historic record turnout. They refuse to see what is plainly before their eyes. There’s never been easier voting in Georgia. My job in this office is to assure all Georgians that there is neither rampant vote theft nor suppression.”

Raffensperger also said there are “radical partisans trying to gin up worries and play to people’s fears.”

The deadline to apply for an absentee ballot in Georgia is close-of-business Friday. Those ballots are due by the time polls close (7 p.m.) on Nov. 3, though. Raffensperger encouraged Georgians concerned about postal delays to use a drop box instead.

He also pleaded with voters who haven’t returned their absentee ballots to do so as soon as possible.

“If you are one of those 640,000 voters who have an absentee ballot — it’s sitting on your kitchen table — please, if you haven’t returned it, do it this week. Now’s the time,” he said.