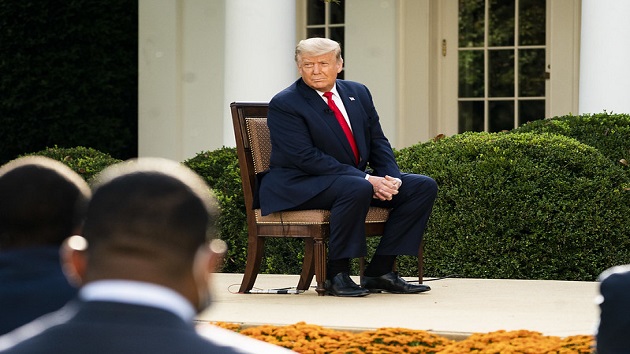 (WASHINGTON) — After two contentious debates and more than $1.5 billion in advertising, President Donald Trump and former Vice President Joe Biden enter the closing week of a bitter campaign with their favorability ratings relatively unchanged since at least the summer, according to an ABC News/Ipsos poll released Sunday.

But unlike four years ago, when both Trump and Hillary Clinton headed into November deeply unpopular – Trump’s favorability at 38% to 60% and Clinton’s at 42% to 56% in the final ABC News/Washington Post poll — Biden is seen significantly more favorably.

Biden’s standing is near even at 44% to 43%, roughly where he’s been for several months in this and similar surveys. The Democratic nominee, though, still has shortfalls, with more men (49%), independents (48%), and white Americans (53%) viewing him unfavorably rather than favorably.

On the other side, while Trump remains broadly unpopular, core blocs of Trump’s base aren’t nearly as critical of him. Fewer than half of white Americans (48%) and whites without a college degree (38%) have a negative attitude about the president.

In another key difference from 2016: Only 10% of Americans said they dislike both Trump and Biden, which is about half the number who said the same about Trump and Clinton.

Biden has sought to cast the election as a referendum on Trump and his leadership. Helping his case is broad disapproval of Trump’s handling of the coronavirus pandemic, the most significant challenge of his presidency.

Over eight months of polling on the virus, which upended the entire 2020 election, Trump’s low approval on the issue has mostly held steady, except for a week in mid-March when it peaked above 50%.

In the latest survey, more than 6 in 10 Americans (61%) disapprove of the president’s response to the pandemic, while only 38% approve. It’s a stark reality for Trump, as his rival has stayed disciplined in making the coronavirus a focus of the race.

“COVID-19 dwarfs anything we’ve faced in recent history, and it isn’t showing any signs of slowing down,” Biden said during a speech in Wilmington, Delaware, the day after the final debate. “He’s quit on your family. He’s quit on America. He just wants us to grow numb and resign to the horrors of this death toll and the pain it’s causing so many Americans.”

Meanwhile, Trump has sought to paint Biden as a liberal extremist and dragged the rest of the Biden family into the campaign, raising questions about improper foreign business dealings.

The president focused his attacks on allegations that Biden improperly profited from business endeavors that his son, Hunter Biden, has undertaken in Ukraine and China. Those attacks do not appear to have changed broad perceptions of the former vice president.

Those controversial endeavors abroad, including in China and Ukraine, did garner criticism from some ethics experts, who said the dealings created an appearance of a conflict. But no evidence has emerged to suggest that Hunter Biden’s private business deals influenced his father’s actions or U.S. foreign policy during his time in office, and the elder Biden has said it did not.

Partisan attacks from both sides have done little to change minds.

Trump’s grip on Republicans remains intact, with his favorability and approval for his handling of the pandemic in the mid-to-high 70s (74% and 79%, respectively).

For Biden, an overwhelming 90% of Democrats have a favorable view of him. Fewer independents view him favorably (39%), similar to Trump (36%) among this group.

As the country reckons with setting a new daily record for coronavirus cases on Friday, with more than 83,000 infections, concerns over contracting the virus hold firm among 78% of Americans, including just over one-third (36%) who said they’re very concerned.

Just over 1 in 5 Americans said they’re not concerned about becoming infected.

On the same day the nation set a new high for cases, Trump claimed at a rally in The Villages in Florida, the largest retirement community in the country, “We are rounding that turn.”

This ABC News/Ipsos poll was conducted by Ipsos Public Affairs’ KnowledgePanel® October 23-24, 2020, in English and Spanish, among a random national sample of 551 adults. Results have a margin of sampling error of 4.8 points, including the design effect. Partisan divisions are 30-26-36 percent, Democrats-Republicans-independents. See the poll’s topline results and details on the methodology here.