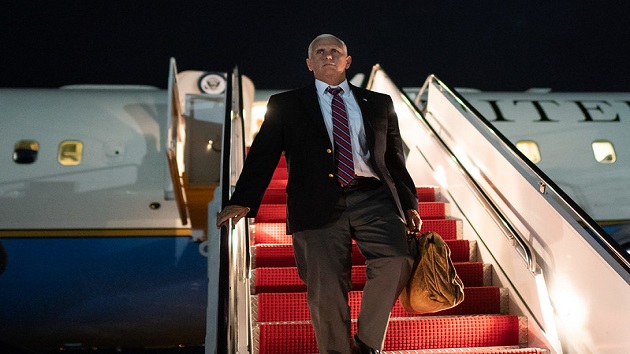 “Today, Marc Short, Chief of Staff to the Vice President, tested positive for COVID-19, began quarantine and assisting in the contact tracing process,” Devin O’Malley, press secretary for the vice president, said in a statement.

Sunday morning, multiple sources familiar with the matter told ABC News that in addition to an outside political ally of Pence’s four of his staffers have tested positive. One senior level source stressed that the three of the staffers have been quarantining since the middle of this past week.

Among those three staffers who tested positive and were in quarantine is Pence’s “body man,” a position that often represents an individual who is the closest aide to the office holder.

White House chief of staff Mark Meadows did not want to immediately reveal that Short and other members of staff close to the vice president had tested positive for the coronavirus, sources told ABC News.

Defending this Sunday on CNN’s “State of the Union,” Meadows said, “Sharing personal information is not something that we should do, not something that we do actually do unless it’s the vice president or the president or someone that is very close to them where there is people in harm’s way. Listen. Any time that there is someone in harm’s way, we have an obligation to let people know to contact trace. We have done that.”

Pence has been crisscrossing the country on the campaign trail for weeks. He made visits to Lakeland and Tallahassee, Florida, on Saturday. On Friday, he spent time in his home state of Indiana, where he voted in person in Indianapolis, before holding rallies in Ohio and Pennsylvania. He will continue his schedule, O’Malley said, despite the close contact with Short.

“While Vice President Pence is considered a close contact with Mr. Short, in consultation with the White House Medical Unit, the Vice President will maintain his schedule in accordance with the CDC guidelines for essential personnel,” he wrote in a statement.

The Centers for Disease Control and Prevention advise essential workers who have been exposed to COVID-19 should take their temperature before work, wear a face mask at all times and social distance “as work duties permit.”

Pence is scheduled to hold a rally in Kinston, North Carolina, on Sunday evening.

President Donald Trump, upon disembarking Air Force One at Joint Base Andrews, was asked about Short’s positive test.

Short has served as Pence’s chief of staff since March 2019.

Obst, a top political aide to the vice president, tested positive last week, multiple sources familiar with the matter told ABC News. He is an outside adviser and not a government employee.

He was spotted at a fundraiser at Trump Doral attended by both Pence and President Trump on Oct. 15. While he was traveling with the VP last week, he wasn’t in close proximity to him, sources say.

Obst did not respond to a request for comment. The vice president’s office did not immediately respond.

The trusted adviser, who ran Pence’s campaign in 2016, has kept up a steady stream of tweets and retweets on Twitter in recent days and weeks, though he does not appear to have mentioned his own diagnosis.

Both Mike Pence and the second lady tested negative for coronavirus in the days after President Donald Trump tested positive and was hospitalized at the beginning of October.

Earlier this month, in an interview with CNN, Short said the vice president was tested “every day.”

At least 34 people connected to the White House tested positive for the virus earlier this month, including the president and first lady Melania Trump, as well as press secretary Kayleigh McEnany, campaign manager Bill Stepien, senior adviser for policy Stephen Miller and outside advisers Kellyanne Conway and Chris Christie.