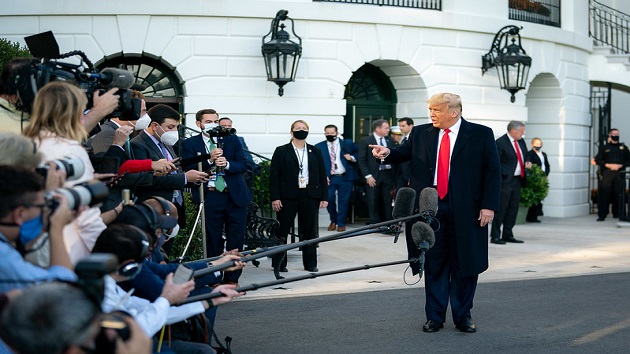 (WASHINGTON) — With nine days to go until Election Day, and President Donald Trump and former Vice President Joe Biden racing toward Nov. 3, voters have turned out in record numbers to cast their ballots early.

More than 56 million Americans have already voted in the 2020 election, reflecting an extraordinary level of participation and interest despite unprecedented barriers brought on by the coronavirus pandemic.

In the final weeks of campaigning, the president has remained on defense as polls show him trailing nationally and in several battleground states key to his reelection hopes. The president will have a campaign rally in New Hampshire to top off a weekend of many rallies across battleground states and Biden will speak during a virtual “I Will Vote” concert.

Vice President Mike Pence will travel to North Carolina Sunday evening to speak at a rally despite a two of his top deputies testing positive for the coronavirus: chief of staff Marc Short and political aide Marty Obst.

ABC News has also learned at least one additional staffer in the vice president’s office has tested positive in the last few days and several staffers are now quarantining. Devin O’Malley, press secretary for the vice president, said both Pence and wife Karen Pence tested negative for the virus on Saturday.

Sunday morning, multiple sources familiar with the matter told ABC News that in addition to an outside political ally of Pence’s four of his staffers have tested positive. One senior level source stressed that the three of the staffers have been quarantining since the middle of this past week.

O’Malley said both Pence and wife Karen Pence tested negative for the virus on Saturday. The vice president is still expected to travel to North Carolina later on Sunday to speak at a rally in Kinston.