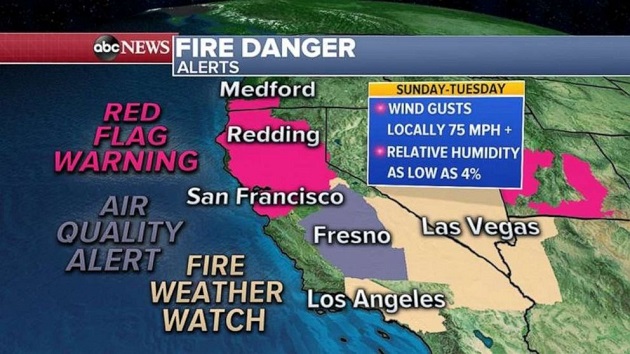 (NEW YORK) — The fire danger in parts of the West, especially in parts of California is looking quite significant.

A major offshore wind event is coming to California and extreme southern Oregon. Red flag warnings and fire weather alerts have been posted for large parts of the state including, San Francisco and Los Angeles.

The event will begin on Sunday and last into Tuesday. Wind gusts could top out at 75 mph, and relative humidity could be as low as 4%.

This could be a very significant fire weather set up, especially for the Bay Area, and into parts of Northern California.

The most damaging wind gusts will arrive late Sunday into Monday in the Bay Area and northern California. The National Weather Service is comparing this event setup to the 2017 Wine County Fires and the 2019 Kincade Fire.

All of this comes just weeks after the August Complex burned over 1 million acres of northern California.

In Colorado, the East Troublesome Fire is now at least 188,000 acres and is still only 5% contained. The fire grew by over 17,000 acres on Friday. Although this is less than previous days, that is still quite considerable.

Winds were a little calmer on Friday and relative humidity has been higher, which has helped firefighters battling the blazes. Unfortunately, the winds will strengthen Saturday, and it will be another challenging day for fire containment efforts in Colorado.

Red flag warnings have been issued for parts of Colorado and Utah, where wind gusts to 60 mph can be expected Saturday, and relative humidity as low as 10%. These conditions could produce more fires and rapid fire spread.

The relatively good news is that a winter storm is on the way to Colorado, and a widespread snow event is expected to arrive in Colorado Saturday night, which will greatly help the firefighting efforts.

Winter weather alerts stretch from Washington to Iowa Saturday morning. This includes a winter storm watch for Denver, and the Colorado Rockies, where the fires are burning.

Some snow may even make it into the Twin Cities metro region, which has now seen its snowiest October on record with 8.9 inches.

Spokane, Washington, got 6.8 inches of snow on Friday, which made it their snowiest October day on record. Around a foot of snow has also been reported in the mountains of western Montana. Snow totals in parts of the highest peaks of Montana could top out at 18 inches. The heavy snow and cold will expand south and east through the weekend.

Through Monday, over 12 inches of snow in parts of the Colorado Rockies and 3 to 6 inches through parts of the central and northern Plains are expected.

By Monday some of the snow will likely make it into parts of Kansas, Oklahoma and Texas. Some of the snow is likely to fall as mixed precipitation and could create icy conditions close to the I-34 corridor, especially near Oklahoma City and northern Texas.

Behind this storm, winter air will race down into the central and northern U.S. Wind chills on Sunday morning will be into the negatives from Idaho to North Dakota. Island Park, Idaho, is expected to have a -17 wind chill.