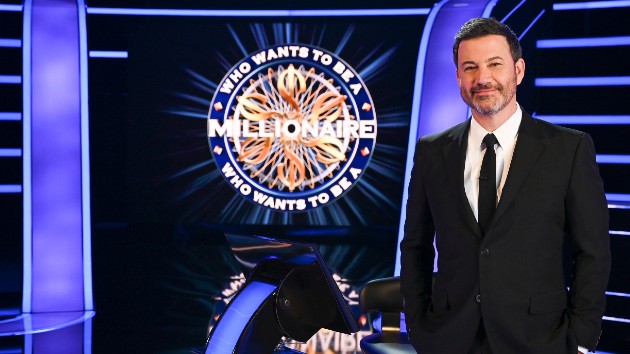 (LOS ANGELES) — Who Wants to be a Millionaire is giving back to frontline workers.

The new season of ABC’s long-running game show is not only welcoming essential workers, they are ensuring that they’ll be winners no matter what by giving them a guaranteed $32,000 prize to take home — a gesture that personally resonates with host Jimmy Kimmel.

“I think it’s important to remember, and this is something I learned when I was in the hospital with my son, is that these people are doing this all the time, not just now,” he explained in a short featurette video to Access Hollywood. “And that they work so hard when we need them the most.”

“That’s more than some people make in a year,” he said in the clip. “I could help out people.”

Even with the guaranteed winnings, Kimmel is hoping that he’s be able to hand out the much heftier, life-changing prize of $1 million to someone in the hot seat.

“I have yet to see that happen, it rarely happens, when it does I don’t even know what it must feel like. But I do want to hand that giant check to somebody – preferably a nurse or somebody who’s been driving an ambulance or somebody who really could use it,” he said.

This season of Who Wants to be a Millionaire also features celebrities who will donate winnings to a charity of their choice.

Who Wants to be a Millionaire airs Sundays at 9/8c on ABC.

Coronavirus live updates: Europe’s regulator to decide on Pfizer vaccine by Dec. 29
Cold blast all the way to the Gulf Coast, snow continues for Eastern Lakes
Hunter shot to death after being mistaken for a deer by another hunter
How to donate wisely on Giving Tuesday
Former Rudy Giuliani associates plead not guilty to fraud charges
Justices skeptical of Trump bid to exclude all undocumented immigrants from census