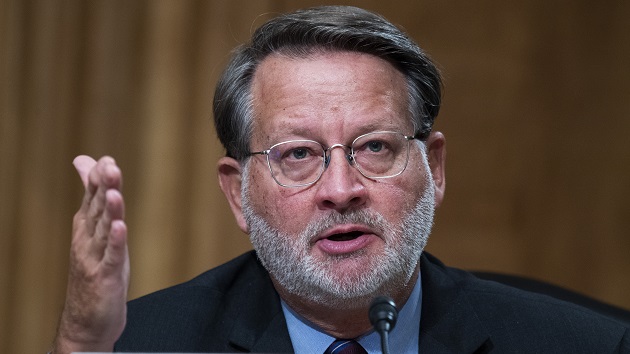 (WASHINGTON) — Mail delivery standards in parts of the country remain well below levels prior to Postmaster General Louis DeJoy’s cost-cutting overhaul of the Postal Service in July, a new report from a Senate Democrat found Friday, casting renewed scrutiny on the beleaguered agency and its controversial leader.

“It is unacceptable that on-time mail delivery has not been restored to levels prior to the Postmaster General carelessly instituting his disastrous operational changes,” said Michigan Sen. Gary Peters, the ranking Democrat on the Senate Committee on Homeland Security and Governmental Affairs.

First-class mail across the country was delivered on-time in 85.6% of cases in mid-October, down from an average of 91% earlier this year, according to a report Peters published late Friday.

After DeJoy put in place a series of measures meant to curb wasted trips for mail carriers and cut employees’ overtime, first-class mail performance plummeted to 81.5% in August, according to the report.

Peters’ analysis, which collated data provided to him by the Postal Service, noted that several major cities, including Baltimore, Detroit and Philadelphia, are suffering the lowest percentage of on-time deliveries.

“While the Postal Service has made some improvements since congressional oversight and federal litigation against Postmaster General DeJoy’s actions began,” Peters wrote in the report, “on-time delivery levels remain unacceptably low.”

The U.S. Postal Service did not immediately respond to a request for comment from ABC News.

Despite the bleak portrait painted in Peters’ report, one figure will alleviate some of Americans’ anxiety: election mail is performing well.

While comprehensive data was not available, Peters wrote that “recent USPS data shows that on-time processing rates for the subset of election mail able to be tracked is above 90%.”

DeJoy, a longtime logistics company executive, faced backlash within months of taking the helm at the Postal Service in June for putting in place measures that critics said would slow mail service.

His changes coincided with unfounded rhetoric from President Donald Trump casting doubt on the efficacy of mail-in voting, prompting allegations that DeJoy’s overhaul might indirectly serve to support the president’s claims. The Postal Service has consistently maintained that it is committed to delivering election mail on time, but in a letter to lawmakers in August, DeJoy acknowledged that his reforms had led to some “unintended consequences.”

In the intervening months, the Postal Service has suffered multiple defeats in federal courts across the country stemming from lawsuits that challenged DeJoy’s overhaul. In September, the agency said it would halt all operational changes until after November.

More Americans than ever are expected to vote by mail in the upcoming presidential election. With nearly two weeks until Election Day, more than 52 million votes have already been cast and at least 85.5 million ballots have been requested, according to the U.S. Elections Project, run by University of Florida professor Michael McDonald.