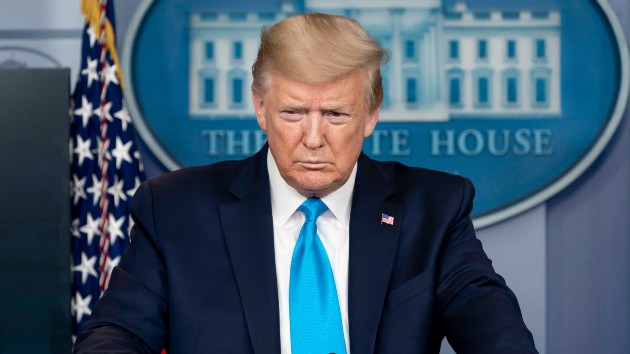 By KENDALL KARSON and WILL STEAKIN, ABC News

(WASHINGTON) — Marcelo Montesinos voted for President Donald Trump in 2016 because he said he saw “a man who would bring a lot of change.”

Four years later, after losing a family member to the coronavirus, Montesinos, 72, is one of many seniors who now say they can no longer support the president because of his handling of the pandemic.

“He knew everything all the way back in February and he didn’t take the precautions … he didn’t believe in science. He doesn’t believe in doctors,” Montesinos said. “He always tries to blame somebody else, like a little kid.”

Montesinos, who is from West Palm Beach, Florida, said he still plans to vote for Republicans in other races.

“It hurt me so much” to hear the president recently dismiss the pandemic by saying Americans were “pandemic-ed out,” Montesinos added. “He was going to be the best president the U.S. ever had if he had taken care of the coronavirus.”

Trump is attempting a repeat of his first victory by banding together a base that’s still mostly white, largely male, less educated and older.

Underpinning Trump’s success in 2016 was, in part, an army of seniors that made up a large slice of the electorate and backed him by 7 percentage points over Hillary Clinton, according to national exit poll data. Older voters are among the most likely to vote and have sided with Republican nominees in every presidential election since 2004, reinforcing Trump four years ago and helping tilt key battleground states in his favor.

But this cycle, former Vice President Joe Biden is cutting into Trump’s coalition, making significant gains with older voters across the U.S., particularly in must-win states for Trump. A recent ABC News/Washington Post poll found the two men running even among likely voters 65 and older nationally — 48% to 49%.

In Florida and North Carolina, two states Trump narrowly won in 2016 and considered crucial for him to win in 2020, the president’s advantage over Biden with seniors is slightly better than his national standing but still well short of his margins over Clinton.

Trump leads Biden by 8 points in Florida and 10 points in North Carolina among likely voters over 65, according to a pair of ABC News/Washington Post polls — margins slashed by roughly half compared to 2016 when he carried this demographic by 17 points and 23 points, respectively, in the two states.

Trump campaign aides have grown weary of the president’s declining support among older Americans, a group they know is critical to his reelection chances, especially in states like Florida and North Carolina, sources told ABC News. Perhaps the most telling sign of concern in Trump circles over seniors is the president’s campaign schedule, with a rally set for Friday in The Villages, a sprawling mecca for retirees in a conservative pocket of central Florida.

“With the President at the helm,” Trump campaign spokesperson Ken Farnaso said in a statement, “seniors can rest assured their voice will be heard in Washington.”

In follow-up interviews with more than a dozen independent and Republican voters over 65 who participated in recent ABC News/Washington Post polls in Florida and North Carolina, including some who voted for Trump in 2016, most said they’re repelled by the president after four years. His fumbled response to the pandemic and derogatory rhetoric outweigh his much-touted economic gains, the voters said.

‘Trump just wants to get reelected’

“It was a really hard decision to make. From an economic perspective, I would be better served by President Trump,” said Cindy Cook, an independent voter in North Carolina. “I have trouble respecting President Trump. I find him to be offensive to many people. … He takes advantage of people — [Dr. Anthony] Fauci is one of them.”

The 68-year old from Durham, where Biden stopped last weekend for a campaign event, voted a mixed ballot, she said, but at the top of the ticket she chose Trump’s rival.

Al, a Republican living in Broward County who is now voting for Biden after backing Trump in 2016, said he took particular issue with how Trump has targeted Fauci, the country’s leading expert on infectious diseases, amid the pandemic.

“No reason for it. [Trump’s] wrong. Fauci knows what’s going on. Trump just wants to get reelected and make everything he does terrific, but he hasn’t done anything,” he said.

The president has ramped up attacks on Fauci in the final days before the election, blasting the leading member of his own coronavirus task force at rallies and as a “disaster” on a recent all-staff campaign call.

“I believe Fauci. I don’t believe anything Trump says unless somebody of substantial means can verify it. Because he just lies all the time,” said Al, who noted that while he’s supporting the Democratic nominee this election he will still be “a Republican now and a Republican after Trump.”

A path to victory for the president runs through the Sunshine state. In 2016, Trump won Florida by just over 100,000 votes, after Florida voted for Barack Obama twice, solidifying its reputation as a swing state.

Trump’s path to victory also winds through North Carolina — a bellwether known for split-ticket voting after electing both Trump and Democratic Gov. Roy Cooper in 2016 — where changing demographics and polarization between urban and rural areas have helped maintain the state’s purple hue.

It’s a state that got behind Obama only once in 2008. In 2016, Trump edged out Clinton by fewer than 4 percentage points, offsetting Democrats’ strength in the cities and suburbs by running up the score in whiter, more rural stretches.

Arlie Thompson of exurban Union County, North Carolina, outside of Charlotte, told ABC News he’s voting for Biden, believing Trump’s response to the defining crisis of his first term eclipsed any progress made with an economy he inherited from Obama.

“He certainly dealt himself a blow by not dealing with the pandemic like he should have,” said Thompson, 77. “The economy is a mess now.”

Voters turned off by age-old attacks

Throughout the election, Trump and his campaign have made targeting Biden, who turns 78 shortly after Election Day and would be the oldest sitting president if elected, as mentally inept and merely a feeble puppet of the “radical left.”

Trump has relentlessly attacked Biden as mentally “shot,” mocked his memory, and used campaign gaffes to paint the former vice president to be in mental decline — efforts that have turned off some older voters.

Trump, 74, is only three years younger than Biden.

“With my age, of course I get insulted,” said Olive Norwell, 93, when asked about the president targeting Biden’s age and mental health.

Norwell, an independent who’s voting for Biden from Vero Beach, Florida, a ruby red area along the eastern shore, added, “but [Trump] himself is 74 — he’s not that far behind.”

Days after testing positive for coronavirus, and with polls showing his support among older Americans slipping, Trump released a video targeting seniors that looked to reassure them the pandemic was under control. The president called seniors “my favorite people in the world,” even casting himself as one.

Just hours later, though, the president posted an edited photo mocking Biden by depicting him in what appears to be a nursing home, sitting in a wheelchair, with the “P” in the former vice president’s campaign logo crossed out to read, “Biden for Resident.”

“It’s the pot calling the kettle black,” said Rick, 76, a Biden supporter from Wake County, a Democratic stronghold in North Carolina that contains Raleigh and its suburbs, and boasts the highest population of any county between the two Carolinas.

“President Trump is the same age I am,” said Dianne Wilkes, 74, who lives in Raleigh. “Those remarks that he’s making, it’s showing discrimination. … It’s not going to help him one iota.”

“[Voters] also are going to be looking at how he’s handled and what he says about COVID-19 and the ludicrous remarks that are not scientifically-based,” she continued. “I think he shot himself in the foot.”

With an opportunity to peel off some of Trump’s base, the Biden campaign has made a concerted effort to court seniors, both in their advertising strategy and travel itinerary. His team has been running multiple ads in battleground states casting the former vice president as the true protector of Medicare and Social Security, and he made multiple trips to Florida in October.

The candidate’s most recent visit to Florida focused almost entirely on his pitch to seniors, hitting heavily Democratic Broward County and honing in on Trump’s declaration at a recent campaign rally that COVID-19 affects “virtually nobody,” mostly “elderly people with heart problems and other problems.”

“He was talking about seniors. He was talking about you,” Biden said, speaking at a senior center in Pembroke Pines, Florida. “You deserve respect and peace of mind, but you’re not getting it because to Donald Trump, you’re expendable. You’re forgettable.”

In Johnston County, North Carolina, which is considered Trump country having voted for the president by 30 points four years ago, one voter is still uncommitted, vacillating between Trump, who he supported before, or Biden.

“I think Joe fits the mold of a person I would most likely want to see as a leader,” Dan, 77, who declined to give his last name, said. “Trump makes a lot of smoke.”

Asked if the election were held today and he had to choose, he said, “I’d vote for Joe.”

Barr appoints US attorney as special counsel in origins of Russia probe investigation
The size of House Democrats’ shrinking majority comes down to nail-biter races
Hollywood ending: Hugh Grant says he and ‘Bridget Jones’s Diary’ co-star Renee Zellweger are still close
“The Force was at play”: Rosario Dawson says a fan’s tweet led to her role in ‘The Mandalorian’
Controversial postal chief poised to remain in Biden administration
Mother shot at funeral for teen son killed by Florida sheriff’s deputy