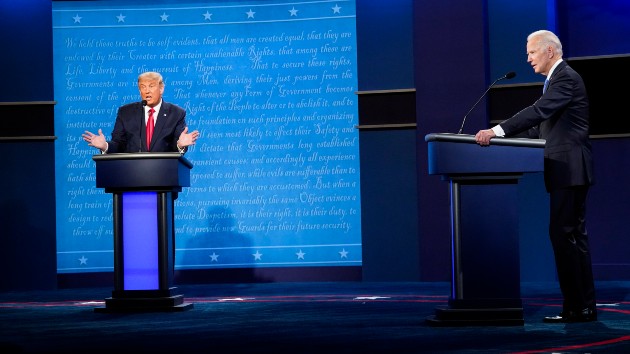 (NASHVILLE, Tenn.) — After the second presidential debate was canceled following President Donald Trump’s coronavirus diagnosis and subsequent hospitalization, both he and Democratic nominee Joe Biden returned to the stage Thursday night for their final opportunity to draw direct contrasts with one another before Election Day.

For 90 relatively-civil minutes, the pair sparred over a range of topics including the pandemic, health care, election security, immigration, their personal financial entanglements and climate change, among other things, guided by moderator Kristen Welker of NBC News.

Though there was some doubt about whether the event would take place after Trump repeatedly expressed dissatisfaction with the non-partisan Commission on Presidential Debate’s attempt to hold a virtual second debate prior to its eventual cancelation — and later their decision to mute the candidates’ microphones during portions of Thursday’s discussion — the debate moved forward without delay and largely absent of the repeated interruptions that marred the first.

Here are five key takeaways from the final presidential debate:

The mics, which were muted for two minutes at a time while each candidate gave his opening response to debate questions, created a much more substantive debate that was far easier to follow than the first, in which Trump interrupted around 70 times and Biden was consistently thrown off track.

At the beginning, the president reigned in his disruptive behavior. During a discussion on opening schools during the COVID-19 pandemic — which Trump advocates strongly for, often regardless of case counts — the president asked Welker if he could respond to Biden.

“Please. Then I have a follow-up,” Welker said.

“Thank you. And I appreciate that,” Trump said.

“And by the way, so far, I respect very much the way you’re handling this, I have to say,” he said about 40 minutes later.

In the end, however, the president’s behavior changed, and he went back to interrupting both Biden and the moderator.

Biden was also more focused than at the first debate, and directly demanded that Trump release his tax returns

That didn’t mean discussions didn’t disintegrate into overtalking, interrupting, awkward quips and hits below the belt on health care, children separated at the border and minimum wage, but Welker largely kept the two men on track and pushed through a series of key topics that yielded substantial answers from each candidate.

Biden lays out forward-looking coronavirus plan, Trump re-litigates his past

The two candidates began the debate by laying out the biggest, most prominent contrast between their visions for the country’s most pressing crisis: the coronavirus. It was also a big portion of the last debate, unsurprisingly, and it’s the foundation of the 2020 campaign, which has become a referendum on Trump’s handling of the virus.

Trump said life must go on despite the virus, used his own coronavirus diagnosis as an example and promised a vaccine on an earlier timeline than experts have offered.

“I say we’re learning to live with it. We have no choice. We can’t lock ourselves up in a basement like Joe does,” Trump said.

Biden said life can’t go on until we stop the virus, and did not let viewers forget who was in charge while 220,000 people died from the virus.

“No. 1, he says that we’re, you know, we’re learning to live with it,” Biden said of Trump and the coronavirus. “People are learning to die with it.”

Trump’s argument consistently painted a picture of an America that had done its best against the virus and had to uphold the economy, despite a rising death toll and 70,000 cases per day.

The president listed off the actions he has taken against the coronavirus, like closing down partial travel from China in January and making PPE and ventilators available around the country.

Biden criticized Trump for allowing the U.S. to become the hardest-hit nation in the world and laid out his plan: a national mask mandate, more rapid tests, federal standards for reopening and funding for small businesses and schools to adhere to public health guidelines.

“You folks home who have an empty chair at the kitchen table this morning, that man and wife going to bed and reaching over to try to touch out of habit where their wife or husband was is gone. Learning to live with it? Come on. We’re dying with it,” Biden said.

Following the lead section on the pandemic, Welker attempted to navigate the candidates toward national security. However, upon the first mention of foreign adversaries — in a question about Iranian and Russian interference in the election — each took the opportunity to level accusations of corruption.

Trump shared misleading claims that the Biden family received improper payments from Russian associates and referred to unsubstantiated allegations that the former vice president’s son, Hunter Biden, attempted to profit off access to his father.

“I think you owe an explanation to the American people,” Trump goaded.

Biden highlighted reports that Trump paid little or nothing in federal income taxes for years leading up to, and during the start of, his presidency. Biden then said he has released his own tax returns because they show no impropriety, and questioned why the president still hasn’t released his.

“Go look at them: 22 years of my tax returns,” Biden said. “You have not released a single solitary year of your tax return. What are you hiding? Why are you unwilling?”

But while the disputes over entanglements and ethics carried on for well over 10 minutes, the audience on social media noted that it was time lost for conversations on issues more impactful upon the average American. The extended exchange arrived before conversations about health care, climate change and immigration — something viewers noted was a potential disservice to casual political observers seeking more substance.

While a candidate’s character will likely always register as a consideration for voters, in the midst of the pandemic, with COVID-19 cases again rising and an unstable economy threatening the livelihoods of millions of Americans, continued focus on the uncorroborated claims against Biden may rob some of the issue-based information they need to make an educated choice.

Trump claimed Biden wants to ban fracking and supports Medicare for All.

Biden, who blatantly said he doesn’t oppose fracking (to the dismay of progressive voters), and who supports improvements to Obamacare over an overhaul of the system (also to the disappointment of further-left Democrats), told Trump he was confused.

“He’s a very confused guy. He thinks he’s running against somebody else. He’s running against Joe Biden. I beat all those other people because I disagreed with them. Joe Biden, he’s running against,” Biden said, referring to Sen. Elizabeth Warren, Sen. Bernie Sanders and other more progressive Democrats who ran in the primaries on platforms including the Green New Deal and government-run health care that would eventually do away with private options.

It’s a distinction Biden has continued to make, a calculated call that progressive Democrats are so invested in ousting Trump that they will settle for a moderate Democrat and still turn out to vote, while undecided voters may be convinced by a more middle-of-the-road approach.

As the final debate question, Biden was asked what he’d say at his inaugural speech if he wins the presidency. In his response, Biden highlighted his devotion to all Americans, including those who don’t vote for him.

“I will say I’m an American president,” Biden said. “I represent all of you, whether you voted for me or against me, and I’m going to make sure you’re represented. I’m going to give you hope.”

With a Supreme Court case threatening to overturn the Affordable Care Act looming on the high court’s docket, and Judge Amy Coney Barrett — who could cast the deciding vote on the suit — heading toward confirmation, the future of the nation’s health care system will be among the top agenda items, regardless of who wins the election.

So when the debate turned to health care — the issue 2018 voters rated as the most important — both Trump and Biden delivered pitches likely to trail them as Americans gauge the winner’s promise-keeping.

Trump touted his administration’s effort to roll back the ACA’s individual insurance mandate and labeled the act as a whole “no good,” despite pledging to protect its popular coverage guarantees for people with preexisting conditions. He then falsely accused Biden of wanting to eliminate private insurance — attempting to link him to the universal, single-payer proposals offered by other Democrats.

Instead, Biden noted that his plan maintains private insurance and builds upon the ACA, by offering a public health care option.

“It’ll become Bidencare,” the former vice president said. “Not one single person with private insurance would lose their insurance under my plan.”

Trump spent much of the 2016 campaign stating he would “repeal and replace” Obamacare. But for now — and until the potential Supreme Court decision — the repeal has fallen flat and a potential replacement failed in the Senate.

The president has also spent much of his tenure in the White House pledging a new health care plan, but has yet to offer concrete details, leaving voters with the choice to either embrace and expand the signature accomplishment of Trump’s predecessor or be willing to follow him down a path of unknowns.