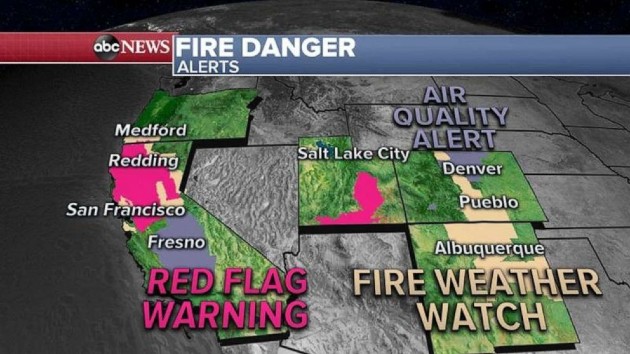 (NEW YORK) — A very serious fire threat will unfold across parts of the Western U.S. Friday, through the weekend and into early next week.

In Colorado, the East Troublesome fire has continued to greatly expand in size. The fire is now the second-largest in state history, with at least 170,000 acres burned, and is only 5% contained. The fire exploded over 100,000 acres early Thursday and then grew another 50,000 acres during the day and early evening.

At least 77% of Colorado is in extreme to exceptional drought right now.

The fire threat in Colorado, unfortunately, has not ended and there is a new fire threat on the way to parts of California and Oregon.

While winds will be weaker Friday morning, another round of strong wind gusts, locally over 60 mph, will be possible late Friday into Saturday. While relative humidity will be a little bit better than previous days, it will still be very windy and relatively dry. This could result in rapid fire spread.

Wind gusts over 70 mph will be possible in the higher elevations, and very low relative humidity is expected. This has all the ingredients for possibly extremely critical fire conditions in parts of the region.

A significant fire threat appears to be on the way later this weekend in California and parts of Oregon.

As fires torch part of the West, some of the coldest weather of the year and snow is expected in parts of the central U.S.

Part of the reason this fire threat is occurring is because of a big push of cold air and some snow that is coming into the northern Rockies and Plains. Wind weather alerts stretch from Washington to Nebraska Friday morning for the new storm.

Through the weekend, over a foot of snow in the highest elevations of the Rockies, including into parts of Montana is expected. Three to 6 inches of snow, locally higher, is also expected late in the weekend in parts of the Plains.

Some of this snow will make it into the hard-hit Colorado, which should both help firefighting efforts, and help current drought conditions.

Additionally, once this cold air makes it into the central U.S. and Midwest, parts of the region will see the coldest air so far this season, with wind chills in the single digits for the northern Plains, and teens and 20s across the Plains and into parts of the Midwest.