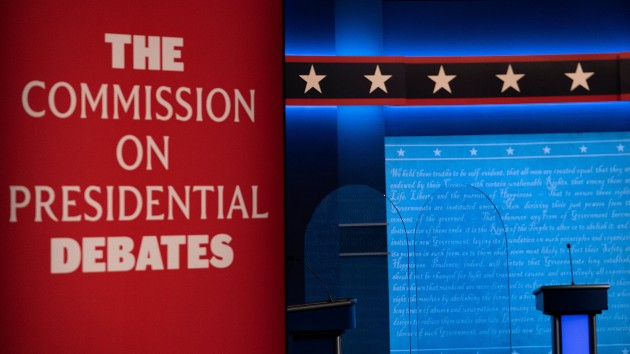 (NASHVILLE, Tenn.) — President Donald Trump and former Vice President Joe Biden, the Democratic nominee, face off in the final presidential debate of the 2020 election cycle from Belmont University in Nashville, Tennessee on Thursday night, marking the candidates’ last chance to pitch themselves to tens of millions of voters in primetime before Nov. 3.

Biden has spent the week hunkered down in Wilmington, Delaware, to prepare — what he’s done before other debates — while Trump has seemingly done less to prepare, telling reporters on Wednesday, “I do prep, I do prep,” without elaborating. Earlier this week, Trump said that answering journalists’ questions is the best kind of preparation.

In the wake of that cancelled second showdown and a chaotic first debate before it, the Commission on Presidential Debates announced earlier this week it would mute candidates’ microphones at certain points Thursday to avoid interruptions in an apparent effort to take back control of the event.

Trump and Biden will now have two minutes each of uninterrupted time to speak at the beginning of every 15-minute segment of the 90-minute debate. After the first four minutes of each segment, both of their microphones will be open by event production staff, Fahrenkopf said. The moderator will not have control of the candidates’ mics at any point.

Biden, meanwhile, has called the rule change “a good idea” and said it appears to him that Trump is going to focus on “personal attacks” during their final showdown.

The Trump campaign made an 11th-hour demand that the debate focus on foreign policy, as opposed to the topics chosen by the moderator, NBC News White House Correspondent Kristen Welker, though the campaigns agreed months ago to allowing the moderator to choose the topics. Welker chose the topics of race, national security, leadership, America’s families, COVID-19 and climate change.

Amid continued COVID-19 concerns, the Cleveland Clinic has designated the Health Corporation of America to work with doctors from the White House and from Biden’s team to test the candidates ahead of the debate. At a NBC News town hall last week, Trump claimed he didn’t remember whether he’d been tested on the day of the first debate, which took place before his first positive COVID-19 test was reported.

Thursday night’s debate also comes as early voting records shatter across the country with more than 43 million ballots already having been cast in the general election and as Trump looks to reenergize his base while he trails Biden in the polls.

ABC Television Network coverage begins at 8 p.m. ET with a one-hour special, Trump vs. Biden: The Final Presidential Debate – A Special Edition of 20/20. ABC News Live will begin previewing the debate at 7 p.m. The debate begins at 9 p.m. and ABC News’ political team will provide context and analysis on both platforms following the debate.