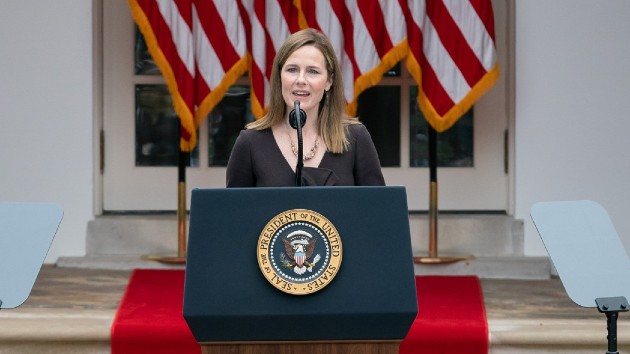 (WASHINGTON) — The nomination of Judge Amy Coney Barrett to fill the Supreme Court seat left vacant by the late liberal icon, Justice Ruth Bader Ginsburg, is expected to sail through the committee Thursday with no Democratic support, setting the stage for a full Senate confirmation vote on a timeline not seen this close to an election in U.S. history.

Committee Democrats plan to boycott the vote and will instead place poster-size pictures of Americans who they say would be hurt by a Justice Barrett, who might potentially cast a deciding vote striking down the Affordable Care Act and its mandated coverage for those with preexisting conditions, a Democratic source with knowledge of the matter told ABC News.

The Supreme Court is poised to hear a GOP attorneys-general challenge to the Obama-era law on Nov. 10, a suit that the Trump Administration has joined and Democrats sought to make their central line of questioning during Barrett’s confirmation hearings last week.

Democrats have fought to slow the nomination, arguing that the person who replaces Ginsburg should be selected by whoever wins the November election, a precedent they say was set by Senate Republicans who in 2016 blocked President Barack Obama’s nominee to the court. Obama appointed Judge Merrick Garland to replace the late Justice Antonin Scalia, a conservative star, eight months before Election Day, but McConnell steadfastly refused to consider the nominee, citing the proximity to the vote. McConnell and Senate Republicans would not even meet with Garland.

“You could not design a set of circumstances more hypocritical than this,” Senate Minority Leader Chuck Schumer said Wednesday of McConnell’s decision to move forward with a vote on Barrett. “The truth is that the Republican majority is perpetrating the most rushed, most partisan, least legitimate process in the long history of Supreme Court nominations.”

But Republicans have argued that GOP control of both the Senate and the White House makes Barrett’s nomination proceedings different from Garland’s, giving them an imperative to act quickly.

Normally, on average, it takes the Senate about 70 days from formal nomination to full Senate confirmation for a Supreme Court appointee. President Donald Trump’s first nominee, Neil Gorsuch, was confirmed in 65 days. By comparison, Barrett’s nomination — if she is confirmed Monday, as expected — will have taken 30 days.

The Democrats’ Thursday boycott will deny the Republican-led panel the necessary number of members present to cast a vote, according to committee rules, but Judiciary Committee Chairman Lindsey Graham has indicated that he would waive those rules and hold the vote, regardless of whether any member of the minority is present.

Graham has been committed to an Oct. 22 vote on Barrett for weeks now, and no level of protest by Democrats is expected to deter him. The South Carolina senator, facing a tight reelection race back home, has campaigned on a promise to “fill the seat.”

Liberal groups have clamored for more of a protest from Democrats for weeks, pushing lawmakers to boycott the hearings altogether. But Senate rules leave very few tools open to the minority to delay proceedings or a vote.

Democrats sought, instead, to use last week’s confirmation hearings to paint Barrett as a threat to health care, abortion access, voting rights civil liberties and even democracy itself.

Barrett dodged repeated attempts by Democrats to get her to commit to recusing herself from election-related matters if the outcome of the 2020 election were to be decided by the Supreme Court, as Trump has predicted.

“Your participation — let me be very blunt — in any case involving Donald Trump’s election would immediately do explosive, enduring harm to the court’s legitimacy and to your own credibility,” Sen. Richard Blumenthal, D-Conn., said to Barrett during her hearings. “You must recuse yourself.”

Barrett said she would “consider it” but pushed back on the insinuation that she might rule favorably for the president merely because he nominated her.

“I certainly hope that all members of the committee have more confidence in my integrity than to think that I would allow myself to be used as a pawn to decide this election for the American people,” Barrett said.

Issues related to the election were front and center for Democrats who fear Trump is looking to secure a justice favorable to him on the court before Nov. 3. They pressed Barrett on simpler questions, like whether the president could unilaterally delay the date of the election — something that, by law, only Congress can do — and whether the president should commit to leave office peacefully, something Trump has appeared to question.

But the judge dodged. As she did throughout her three days before the committee, Barrett said that she could not weigh in on matters that might come before the court. She said she was merely following the “Ginsburg rule,” providing “no hints, no previews, no forecasts,” as the late justice had famously done at her own confirmation hearings in the 1990s.

Still, this didn’t stop Democrats from pressing Barrett on a slate of liberal priorities, chief among them the fate of the Affordable Care Act.

Committee Democrats repeatedly drilled Barrett on an academic critique Barrett — then a Notre Dame professor — made of Chief Justice Roberts’ decision to uphold the Act in 2012.

“In filling Judge Ginsburg’s seat, the stakes are extraordinarily high for the American people both in the short term and for decades to come,” Sen. Dianne Feinstein, D-Calif., said. “Most importantly, health care coverage, for millions of Americans, is at stake with this nomination.”

But Barrett, sticking to her originalist legal philosophy, said she could only commit to thoroughly reviewing the merits of health care cases that came before her.

“I am not hostile to the ACA,” Barrett repeatedly insisted to lawmakers. “I apply the law, I follow the law. You make the policy.”

Barrett also made waves when she said she did not believe that Roe v. Wade, the landmark case allowing for women to access abortion care, was not a so-called “super precedent,” something so established that it would likely never be overturned.

But the judge — over and over — demurred, alarming abortion rights groups.

Asked by Feinstein if she agreed with her mentor, Scalia, that Roe v. Wade was wrongly decided, Barrett wouldn’t show her hand.

“If I express a view on the precedent one way or another, whether I say I love it or hate it, it signals to litigants I might tilt one way or another in a pending case,” she said, while also claiming that she would chart her own course on the highest court, despite her admiration for Scalia.

Republicans used the hearings to champion Barrett, a devout Catholic and mother of seven, as a trailblazer for conservative women and a well-qualified nominee, and repeatedly sought to draw Democrats into a fight about her faith. But Democrats refused.

“To my friends across the aisle, I would say that the American people are no more afraid of the ideas of a Catholic woman than they are of the words splattered on a protest poster being held by a liberal woman,” Sen. Marsha Blackburn, D-Tenn., said.

Republicans looked to dispel concerns about the impact that Barrett’s Catholic faith might have on her ability to rule impartially.

“Can you set aside whatever Catholic beliefs you have regarding any issue before you?” Graham asked.

“I have done that in my time on the 7th Circuit. If I stay there I’ll continue to do that,” Barrett said. “If I’m confirmed to the Supreme Court, I will do that still.”

Thursday’s Judiciary Committee vote will put the Senate on track to confirm Barrett before Election Day, something the Senate majority leader said Republicans have a duty to do.

“We’ve heard Democrats try to take hostage our very institutions of government to stop this precedent-backed process from moving forward, but none of the distortions could even begin to cloud the incredible qualifications of the nominee,” McConnell said. “The full Senate will turn to Judge Barrett’s nomination as soon as it comes out of committee.”