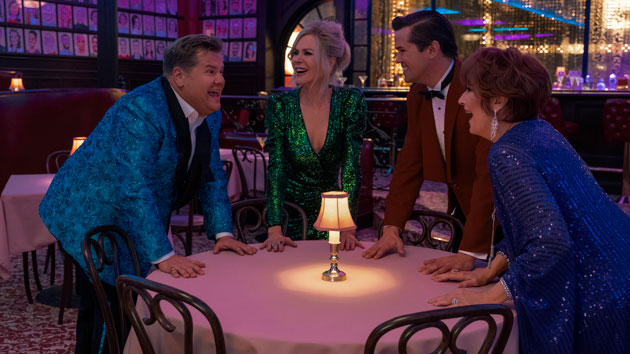 Today, Netflix unveiled the trailer for the upcoming film, The Prom, based off the Tony Award-nominated Broadway musical written by Bob Martin and Chad Beguelin, who also co-wrote the screenplay.

The plot follows Steep’s Dee Dee Allen and Corden’s Barry Glickman, Broadway stars whose careers are on the line after a failed production. They team up with washed-up actors Angie, played by Kidman, and Trent, played by Andrew Rannells, to travel to Edgewater, Indiana, where high school student Emma Nolan, portrayed by Jo Ellen Pellman, is forbidden from attending prom with her girlfriend Alyssa, portrayed by Ariana DeBose.

Initially done in an attempt to salvage their public images, the stars ultimately create an unforgettable night for the teens that celebrates who they truly are.

The trailer captures the glitz and glamour of the Ryan Murphy-directed flick, complete with flashing lights, glittering costumes and elaborate dance sequences.

“We have come to this community on behalf of a young girl,” Streep says in a voice over, followed by choreographed group numbers and Pellman dancing down a staircase with Kidman, who reassures the young girl, “you do have friends and we are ride or die.”

The Prom debuts on Netflix and in select theaters on December 11.

Prolific bank robber dubbed the ‘Too Tall Bandit’ strikes after taking 2-year break: FBI
Oscar winners George Clooney and Regina King among ‘People’ magazine’s 2020 People of the Year
Tyrese Gibson says the feud between him and The Rock has officially ended
Contract extension to keep LeBron James with the Lakers
Report: 2021 Oscars to buck the virtual trend and proceed as an “in-person telecast”
Amid COVID-19, moms leaving the workforce could have lasting impact on economy