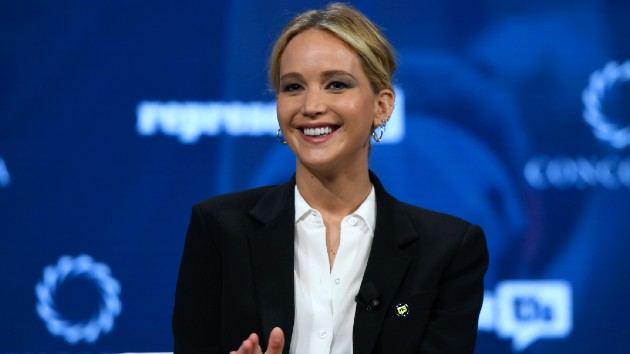 (LOS ANGELES) — Jennifer Lawrence opened up about her voting habits and her changing political beliefs in a rare interview on Wednesday.

Sitting down for the Absolutely Not podcast, the 30-year-old Hunger Games star revealed that, up until recently, she had considered herself a Republican.

“I grew up Republican. My first time voting, I voted for John McCain. I was a little Republican,” Lawrence dished, adding that she was attracted to the party because of “the fiscal benefits of some of the Republican policies.”

However, as she grew older, she realized that she and the Republican Party held differing opinions when it came to social issues that she found important.

Lawrence added that her beliefs were consistently challenged over the past few years not by friends or family — but by her own observations of President Donald Trump.

“I don’t want to support a president who supports white supremacists,” said the Academy Award winner, referencing the most recent political debate where the president appeared to dodge condemning groups with links to white supremacy, such as the Proud Boys.

During the Chris Wallace-moderated debate, President Trump seemingly told the Proud boys to “stand back and stand by” when pressed to disavow them.  Lawrence says that moment was “a line drawn in the sand.”

“This is an impeached president who’s broken many laws,” she added.

Lawrence also noted how much things have changed since former President Barack Obama left office, adding that while he was in power, Americans used to “go days, maybe weeks, without thinking about the president because everything would generally be okay.”

The actress previously announced via V Magazine that she will be voting for former Vice President Joe Biden and running mate, California Senator Kamala Harris.

Appeals court weighs whether Justice Department should substitute for Trump in defamation suit
Trailer shows Amazon Prime got a big star, literally, for its Jack ‘Reacher’ series
NASA astronauts complete spacewalk which was postponed due to debris risk
Don’t get the cheese touch! ‘Diary of a Wimpy Kid﻿’ now streaming on Disney+
Jon Stewart joins ABC’s ‘Live in Front of a Studio Audience: ”The Facts of Life”
See a life-sized house made of candy come to life on Hulu’s ‘Candified: Home for the Holidays’