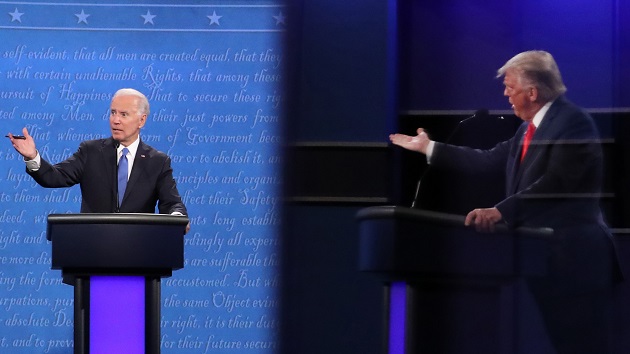 The president focused his attacks on allegations that Biden improperly profited from business endeavors that his son, Hunter Biden, has undertaken in Ukraine and China. The Democratic challenger fired back with reports that Trump has tried to strike business deals with the Chinese and even maintained a bank account there.

Prior to the high-stakes debate, Trump’s campaign organized a hurried press conference to introduce a surprise guest — a man who claims he had business dealings with the Biden family.

Tony Bobulinski, a self-described global businessman and retired Naval officer, accused the Bidens of misleading the public about their overseas business dealings – a move intended to shift the public’s focus to unsubstantiated and unproven allegations of corruption against the Democratic nominee and his family.

“I have heard Joe Biden say that he has never discussed business with Hunter. That is false,” Bobulinski said. “I have firsthand knowledge of this because I directly dealt with the Biden family, including Joe Biden.”

With little warning, Bobulinski appeared in a hotel ballroom to speak with the White House reporters who traveled with the president to Nashville, Tennessee, just hours before the candidates took the stage for the second and final debate before Election Day.

The pre-debate event set the stage for a series of attacks Trump leveled against Biden when the debate got underway.

“Somebody just had a news conference a little while ago who was essentially supposed to work with you and your family, but what he said was damning,” Trump said. “And regardless of me, I think you have to clean it up and talk to the American people.”

Biden shot back: “I have not taken a penny from any foreign source ever in my life.”

Bobulinski’s emergence came with fewer than 12 days until Election Day. The man who said he had worked to start a business venture with Hunter Biden accused the former vice president of lying about his knowledge of those foreign business dealings. Bobulinski has been advised by a former counsel from the Trump Administration who is currently on the payroll of the Trump Organization, sources told ABC News.

Without fielding reporters’ questions, Bobulinski described discussions he held with Hunter Biden beginning in 2015 to partner in a joint venture with a now-defunct Chinese energy firm. Bobulinski pointed to an unverified email from May 2017 — after Joe Biden left the White House — in which Hunter allocated a cut of their profit to “the Big Guy,” a reference to Joe Biden, according to Bobulinski.

Bobulinski told the reporters his allegations “are corroborated by emails, WhatsApp chats, agreements, documents, and other evidence,” including three cell phones he said he would be handing over to Senate Republicans later this week.

ABC News has not verified the authenticity of Bobulinski’s documents and there is no direct evidence that Joe Biden was aware of the deal described by Bobulinski.

The Biden campaign immediately issued a full-stop rebuttal of Bobulinski’s claims, which it characterized as a “desperate, pathetic farce executed by a flailing campaign with no rationale for putting our country through another four years of hell.”

“Joe Biden has never even considered being involved in business with his family, nor in any overseas business whatsoever,” said Biden campaign spokesman Andrew Bates. “He has never held stock in any such business arrangements nor has any family member or any other person ever held stock for him.”

Trump and his allies have sought to weaponize Hunter Biden’s foreign dealings for more than a year. Those controversial endeavors abroad, including in China and Ukraine, did garner criticism from some ethics experts, who said the dealings created an appearances of a conflict.

But no evidence has emerged to suggest that Hunter Biden’s private business deals influenced his father’s actions or U.S. foreign policy during his time in office. And Joe Biden has said it did not.

During the debate, Biden said “the only one who has made money from China is this guy,” referring to Trump. The Biden campaign’s response also highlighted recent reporting in the New York Times that ties Trump and his family to Chinese business endeavors over the years.

The newspaper reported that Trump “spent a decade unsuccessfully pursuing projects in China” and maintains a bank account there.

Trump defended his business interactions in China as something “millions of other people” do, but decided not to move forward when he decided to run for president.

Since taking office, the president’s adult children, Eric and Donald Jr., have continued to operate The Trump Organization in a host of business deals overseas, including in India, Uruguay, the United Arab Emirates, and Turkey during their father’s presidency.