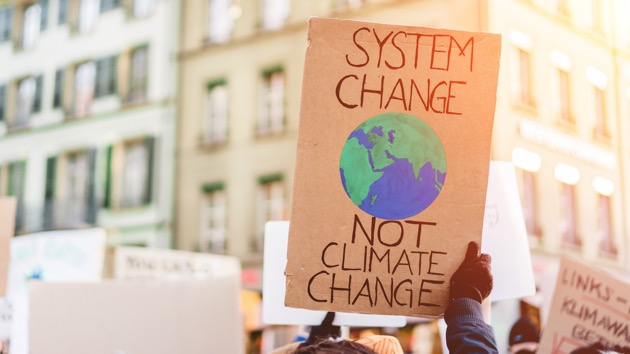 (WASHINGTON) — Climate change is set to be one of the topics discussed by former Vice President Joe Biden and President Donald Trump in the last presidential debate of 2020, but climate scientists say the political conversation often focuses too much on the “what” and “why” that experts already agree on.

The first presidential debate marked the first time climate change has been asked on that stage in 12 years. But the question itself was similar and asked the candidate, in this case Trump, if he believes in concluded science that has found the climate is changing in problematic ways and those changes are caused by human activity.

Supreme Court nominee Amy Coney Barrett called climate change “a contentious matter of public debate” in her recent confirmation hearing. She claimed that, unlike the questions of whether COVID-19 is infectious or smoking causes cancer, the question of whether climate change is real, is controversial.

But climate science experts say there is no controversy when it comes to what is happening to the planet and why. Surveys have found that 97% of climate scientists agree the only explanation for the amount of warming is increased greenhouse gas emissions as a result of human activity.

“The fact that scientists almost unanimously agree that human-emitted greenhouse gases like carbon dioxide like methane are responsible for climate change, the fact that scientists agree on that is really, really, really significant, and it’s really telling us something,” Kate Marvel, an associate research scientist for the NASA Goddard Institute for Space Studies, told ABC News.

The issue of climate change has proved important to voters this year, as 68% of registered voters said it’s very or somewhat important to their vote according to a recent poll from the PEW Research Center.

“I worry that the policies of the government are not going to match the will of the people, because I think it’s important to point out that the hardcore committed climate skeptics deniers — whatever you want to call them — that’s a very small proportion of the population,” Marvel said.

Gavin Schmidt, director of the Goddard Institute, said science has concluded the “what” and “why” of climate change. He said that like scientific detectives, researchers have looked at information about the Earth’s climate going back billions of years and the fingerprints of human activity are all over the evidence.

Schmidt said if people read the literature or talk to anyone in the field, it’s clear that human activity (our sources of energy, infrastructure, agriculture and transportation) is the source of greenhouse gases, and it has led to the effects of climate change seen today, as well as the damage to the natural environment, like deforestation.

Scientific conclusions about climate change are combined into major reports by the United Nations Intergovernmental Panel on Climate Change, the National Climate Assessment commissioned by Congress through the U.S. Global Change Research Program, and the National Academies of Sciences, Engineering, and Medicine. The reports represent the best of the best science and have raised the alarm about the impacts of climate change for years.

Don Wuebbles has been researching the climate for decades and has contributed to and co-authored some of those reports. Wuebbles is a professor of atmospheric science at the University of Illinois and was the White House expert on climate science for two years under President Barack Obama.

He said the science on climate change is very clear, and the debate has to get past the political divisions.

“There are no natural cycles that can explain this, we don’t see them in the climate information we have, and certainly nothing in the last 120 years or so that can explain this,” he told ABC News. “This is a huge anomaly relative to those prior times and unheard of within human experience. So the data we have is very clear about giving us, you know, a sense of what’s going on.”

Major climate reports released in recent years have added to the sense of urgency because they found that the consequences of changes to the atmosphere and environment caused by humans will only get worse.

“In a climate time sense you know, looking out over a decade or more, we’re seeing this increased intensity, and that’s going to continue,” Wuebbles said.

“So it’s not just simply warming, you know, ‘global warming’ is a term the media has always liked and scientists of course called it climate change, because it’s so much more than just… the average temperature going up, it’s really about these changes in weather extremes and change in sea levels that are really having the significant impact on humanity.”

Wuebbles said it’s important to mitigate the impact of climate change by reducing carbon dioxide and other greenhouse gas emissions and considering how to be more resilient to the changes that we’re already experiencing.

“I always tell people we have three basic solutions: We can mitigate, we can adapt or we can suffer, and right now we’re doing all three,” he said.

“But I can tell you as a scientist, I think it has to be near the top of our list of things that we should be worrying about,” he added.

Schmidt said the questions of how to respond to climate change are where the public debate comes into play, because it’s up to policymakers and elected officials to decide what to do in response to these challenges, or if they will do anything at all.

“I’m a scientist, not a policy analyst, but the key thing to me is to normalize this idea that we have to be reducing emissions on a sustainable basis, not just for one electoral term, not just for two, but for decades and for decades past that, for for the rest of this century,” he said.

Though there are uncertainties around how climate change will play out, Marvel said science has ruled out a future where the impacts are not a big deal, and she said it’s important to respond as swiftly as possible to limit the damage.

“The way I think about climate change is, it’s not a cliff you fall off. It’s more like a slope that you slide down, and the farther down the slope you go the harder it is to turn around and climb back up,” she said.

But when asked about what gives her hope in combating climate change, Marvel said she compared it to learning a new language, saying it’s not a question of hoping you can do something, but making the decision to do it and taking steps to achieve that goal.

“Probably the single most important thing anyone can be doing is talking to the representatives, voting with consideration that climate change is really an important part of the issues that the world is facing and that we got to deal with this,” Wuebbles said. “So if you vote. Think about that.”