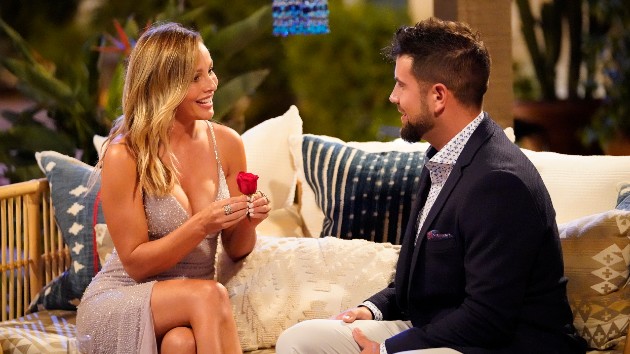 (LOS ANGELES) — On Tuesday’s episode of The Bachelorette, Clare Crawley challenged the men to bare their souls… among other things.

The Bachelorette was interested in finding out everything she could about her suitors and she attempted to accomplish that in a series of dates, the first of which consisted of a series of challenges aimed at letting Riley, Jordan, Yosef, Ivan, Ben, Bennett, Zac C., Zach J. and Dale demonstrate their knowledge of love languages — words, gestures and physical touch.

Clare was impressed with all of them, that is until the after-party, when no one seemed interested in spending time alone with her, which forced her to get the ball rolling.  When she expressed her anger over the situation, the men sheepishly apologized, except for Yosef, who thought her response was over the top.

The one-on-one date went to Jason, whom Clare believed was using his energy and humor to cover up a painful past.  Sitting by a crackling fire, she challenged him to join her in a series of exercises aimed at helping open them up and reveal their deepest, darkest secrets.  The 31-year-old former pro football lineman from Arlington, Virginia accepted the challenge and his honesty was rewarded with a rose.  The date ended with Clare exorcising her own demons by throwing the dress she wore for the finale of Juan Pablo’s season of The Bachelor into the fire and the two of them watched it burn.

Another group date featured another group of suitors, among them Brandon, Blake Moynes, Eazy, Kenny, Garin, Joe, Demar, Jay and Chasen, splitting into teams of five for a game of strip dodgeball.  The winners got some precious alone time with Clare while the losers took a walk of shame home wearing nothing but their birthday suits.

At the after-party, Brandon hit all the wrong notes with Clare when she asked what brought him to the competition. The only answer he could come up with was that he was attracted to her looks, so she showed him the door.

Chasen, on the other hand, whose confession about being bullied as a child touched Clare, received the date rose.

Blake, a member of the losing dodgeball team who broke the rules once before by contacting Clare prior to the competition, broke the rules again by crashing the after-party.  The risk seemed to backfire this time, when an attempt to kiss Clare was met with a rebuke.

Later, however, at the pre-rose ceremony cocktail party, Blake — and the other men — were shocked when Clare pulled him aside and handed him a rose, explaining that the gesture, while wrong, was flattering nonetheless.

Who else get a rose?  Who will survive another week?  We’ll find out when The Bachelorette returns Tuesday at 8 p.m. ET on ABC.

Denver Broncos the latest NFL team hampered by coronavirus
New storm system to travel across the South this weekend
Black Friday 2020: Tips on the best deals to look out for
Michael Jordan donates $2M of proceeds from “The Last Dance” to food banks
George Floyd’s brothers on the fight for justice, remembering him on Thanksgiving
Heavy rain in the Northeast, critical fire danger in the Southwest