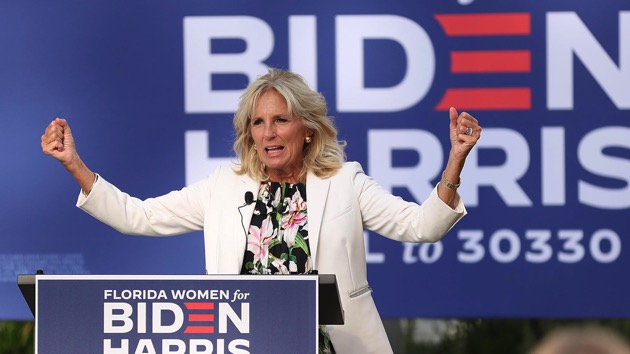 (NEW YORK) — Former second lady Jill Biden says with less than two weeks until Election Day, her husband, former Vice President Joe Biden, and his campaign are not taking anything for granted and urged people to make their voices heard.

“I feel a lot of really positive energy but we’re not taking anything for granted. And I hope…that your viewers know that, and everybody, everybody gets out there and votes,” Biden said on ABC’s The View on Wednesday.

As Biden’s campaign enters the final days, Biden is in a winning position by all traditional metrics.

National polling shows Biden with a strong lead over President Donald Trump and in a tight race with the president in key battleground states. The campaign also recently announced it broke its own fundraising record, bringing in an unprecedented $383 million in September and closing out the month with $177 million in the bank, which is nearly triple Trump’s total.

“If we learned anything from 2016, it’s that we cannot underestimate Donald Trump or his ability to claw his way back into contention in the final days of a campaign, through whatever smears or underhanded tactics he has at his disposal,” O’Malley Dillion wrote in a memo to supporters.

“We have just a handful of days left to decide the course of this election and the future of our country. We cannot become complacent because the very searing truth is that Donald Trump can still win this race, and every indication we have shows that this thing is going to come down to the wire.”

In the days leading up to the final presidential debate between Biden and Trump Thursday night, Biden has hunkered down in Wilmington, Delaware, prepping with advisers for his tussle with Trump after their raucous first debate.

Trump has signaled his plans to attack Biden’s family, and his son Hunter in particular, but Jill Biden argued the attacks would be a distraction.

“The American people don’t want to hear these smears against my family. The American people are struggling right now. I mean, they’re in the midst of all this chaos. They’re trying to figure out how to put food on the table, you know, they don’t have jobs, they need health care. Americans don’t want to hear this,” Biden said, before praising her husband for speaking directly to voters during the first debate.

“Donald Trump just ranted and I don’t even know what he was doing up there. So, this time, the commission has said that they will mute the mics, and they’ll each get their two minutes to speak and so the American people will clearly see their choice,” she continued.

While the former vice president prepares, Jill Biden has hit the campaign trail hard for her husband, becoming one of his most active surrogates . On Tuesday alone, Jill Biden took part in four events in the critical state of Michigan.

All told, she has headlined roughly 25 events in eight battleground states in October — including Florida, Georgia and Texas — in addition to a steady flow of virtual events during the final stretch of her husband’s third presidential run.

“Honestly, I feel inspired by the people that I’m meeting and I know that we’re going to make such a great change — a positive change in people’s lives so I’m not tired,” Biden said of her campaign efforts.