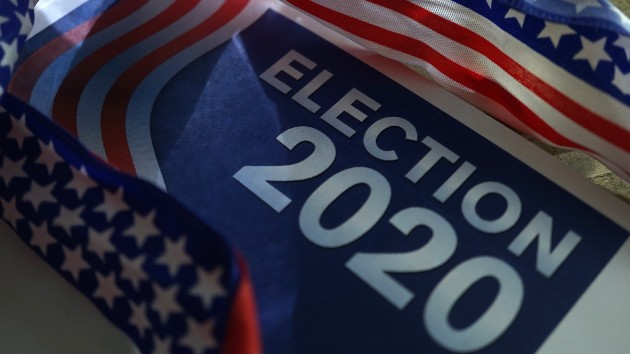 (WASHINGTON) — With 13 days to go until Election Day, and President Donald Trump and former Vice President Joe Biden racing toward Nov. 3, voters are turning out in record numbers to cast their ballots early.

Roughly 38 million Americans have already voted in the 2020 election, reflecting an extraordinary level of participation and interest despite unprecedented barriers brought on by the coronavirus pandemic.

Biden, maintaining a lead in national polls — his largest of the election, according to FiveThirtyEight’s average — has no public events on his schedule this week so far ahead of Thursday’s final presidential debate with Trump. Staying off the trail ahead of debates is a pattern for the former vice president.

The rhetoric between candidates is expected to heat up ahead of their second and final showdown in Nashville.

Here is how the day is unfolding. All times Eastern:

A Maryland man has been charged for making threats to kill and kidnap Biden and Harris.

James Dale Reed, of Frederick, Maryland, allegedly left a threatening note on the doorstep of a home displaying Biden/Harris signs in the front yard.

Reed was captured by the home’s ring camera. He is charged for making threats against a major candidate for president and vice president.

Early in-person voting continues in Wisconsin after a record first day with 75,519 votes being cast Tuesday and some voters showing up to their polling sites before dawn with folding chairs, snacks and medication to stand in line.

The early voting period in Wisconsin lasts through Oct. 30, though the schedule is different in every municipality and is expected to bring a surge of absentee ballots in a state already boasting strong turnout: As of this morning, Wisconsin voters have cast nearly 40% of the total votes counted in the state in 2016.

Because Wisconsin voters fill out absentee ballots in-person, election clerks in the state won’t start counting these votes until Election Day, so the timing of the results could vary depending on the staff available to each municipality.

In Madison, the City Clerk said 6,000 poll workers are signed up, compared with 3,000 for the 2016 election, and they “do not anticipate running any later than usual.” Meanwhile, over in Milwaukee, the chair of the Milwaukee Democrats has been telling voters they should be prepared to wait until Nov. 11 so that people aren’t concerned by delays.

With less than two weeks until Election Day, early voting continues to hit record numbers across the country.

More than 40 million votes have already been cast and at least 84 million ballots have been requested in the 2020 general election, according to the United States Elections Project, spearheaded by University of Florida political expert Michael McDonald.

The unprecedented early voting numbers can be attributed to the coronavirus pandemic as well as an increase in voter interest. Voters are more eager to cast a ballot ahead of Election Day where polling sites could be viewed as overcrowded during pandemic standards.

Trump’s reelection campaign committee is entering the critical final stretch with just $63 million left in the bank — a significant financial deficit for the incumbent compared to his cash-flushed challenger, Biden, the latest campaign disclosure reports show.

The sum was a stunning reversal for a campaign that in the spring boasted $180 million more on hand than Biden and Democrats as the former vice president was coming out of a competitive primary.

Seven months later, Biden’s campaign committee closed out September with $177 million in the bank, which is nearly triple his rival’s total.

In all, the president’s campaign, the RNC and their joint committees raised a total of $248 million in September and ended the month with $251 million on hand, compared with the $325 million they had at the end of August.

The Biden campaign, the Democratic National Committee and their joint operations in comparison, raised a total of $364.5 million in September and entered the crucial last month of the race with $432 million on hand, which is nearly twice as much as Trump and Republicans.

The Democratic National Committee is launching a multilingual print, digital and radio advertising campaign to reach roughly one million Asian Americans and Pacific Islander or AAPI voters in battleground states, making a clear play for voters of color less than two weeks from Election Day. Earlier in the month, they released ads targeting African American voters.

The ad buy is the first multilingual ad campaign targeting AAPIs that the DNC has launched this cycle and will run in Chinese, English, Hindi, Korean, Telugu/Urdu and Vietnamese. Ads will run in national publications such as the Korea Times, Nguoi Viet and World Journal, as well as local outlets in Arizona, California, Florida, Georgia, Michigan, Minnesota, Nevada, North Carolina, Pennsylvania, Texas and Wisconsin.

“Democrats are meeting AAPI voters where they are and in the language, they speak by making historic investments to ensure AAPIs across the country have the information they need to make their plan to vote,” DNC Chair Tom Perez said in a statement to ABC News.

The six-figure targeted ad buy, is a part of a larger investment by the DNC focused on get-out-the-vote ads in constituency media.

It’s a classic political moment — the still-popular former president hitting the trail for his loyal former deputy, helping to close strong for the man he wants to see continue his legacy.

But even if former President Barack Obama was filling a stadium as opposed to its parking lot on Wednesday, this would not be a moment for nostalgia among Democrats.

As Obama makes his first in-person campaign visit on behalf of Biden on Wednesday in Philadelphia, it’s worth remembering how vital the former president is to the political identity of both Biden and Trump.

Obama has been an omnipresent force this campaign, if often slightly off-stage. Biden’s references to “Barack and I” helped carry him through primaries where Obama stayed neutral, and Trump’s rants about “Obamagate” and other exaggerated alleged transgressions are part of his greatest-hits rally rotation.

Obama on Wednesday is expected to emphasize down-ballot races and speak directly to Black men, amid signs that Biden is underperforming in that demographic. Younger Black voters in particular are a concern for the Biden campaign, which sees potential victory in turnout in Philadelphia, Detroit and Milwaukee — to say nothing of Charlotte, North Carolina and Atlanta.

A “drive-in car rally” with honks and high beams do not make the visuals anyone could have predicted for Obama’s return to the trail.

But the former president is a potent political force — something both Biden and Trump can agree on.