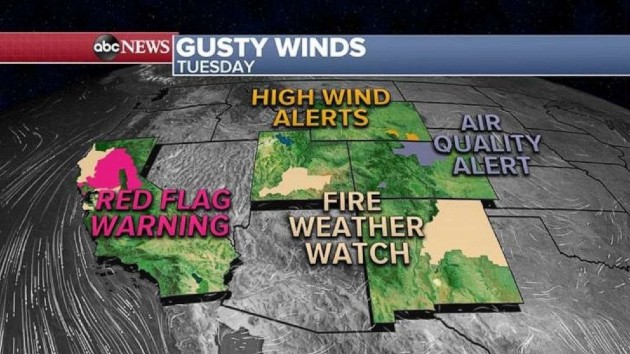 One of the biggest in the West is the Cameron Peak Fire in Colorado which is now 204,404 acres and down to 51% containment while evacuations continue.

The Calwood Fire in Colorado is now 9,108 acres and is only 17% contained with evacuations ongoing.

The Luna Fire in New Mexico is at 9,000 acres and containment is unknown.

On Tuesday morning, five states from California to Wyoming are under fire, wind and air quality alerts.

In Northern California, new Red Flag Warnings have been issued where winds could gust 20 to 40 mph in the next 24 hours.

An early season snowstorm is moving from the northern Rockies into the Midwest where some areas in Montana saw up to 20 inches of snow.

On Tuesday, snow moves into Minneapolis, Minnesota and Wisconsin where some areas could get up to a half-foot of snow.

More snow is on the way and expected for the Upper Midwest and the northern Plains later in the week while, over the next few days, some areas could see 6 to 12 inches of additional snow.

Elsewhere, Tropical Storm Epsilon has winds now at 45 mph and is moving northwest in the direction of Bermuda.

Over the next few days the cyclone is expected to strengthen and become a hurricane.

The good news is that it is expected to miss Bermuda by the end of the week and also miss the United States East Coast with only rip currents and some large waves expected in the U.S. over this weekend.

Coronavirus live updates: Europe’s regulator to decide on Pfizer vaccine by Dec. 29
Cold blast all the way to the Gulf Coast, snow continues for Eastern Lakes
Hunter shot to death after being mistaken for a deer by another hunter
‘The Disney Holiday Singalong’ brings screen stars and Broadway talent together for heartwarming show of unity
Baby born from 27-year-old frozen embryo breaks record
Be patient and use caution when driving during winter weather