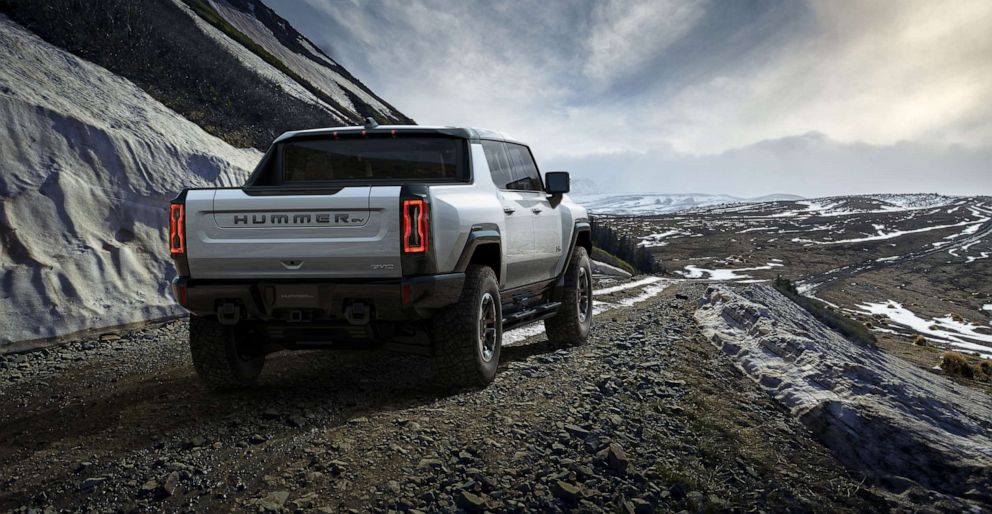 The 2022 Hummer EV pickup truck made its grand debut Tuesday evening, the newest electric vehicle to target Tesla’s stronghold on the EV market.

The old Hummer — a military-esque, boxy ute that averaged 10 mpg — was a lightning rod for environmentalists before sales were halted in 2010. This time, the Hummer EV may attract the very naysayers who shunned and sneered at its brawny image.

“We created something people will be amazed by, regardless of the propulsion system,” Duncan Aldred, vice president of Global GMC, told ABC News. “It’s the world’s first supertruck.”

Discussions to reboot the polarizing Hummer nameplate started two years ago at GMC, the upscale truck brand owned by General Motors. Executives moved quickly to showcase GM’s new Ultium battery system and capitalize on motorists’ growing interest in zero-emissions technology. Reviving the Hummer nameplate from GM’s archives was debated at the top levels of the company.

“Clearly there was concern bringing back Hummer,” Aldred said. “There was a recognition that the old Hummer was a gas-guzzler. We talked to focus groups to find out how deep-rooted the hate was. But we also knew there was something legendary about Hummer — something iconic.”

The Hummer EV still retains the character, presence and signature grille of the previous generation. But “this is not a retro vehicle,” Aldred explained. “It has a progressive design. It looks different from what you see on the road today.”

The $112,595 Edition 1 Hummer EV includes a three-motor e4WD drive system that offers 350 miles of driving range on a full charge. If hooked up to an 800-volt DC fast charging station, Hummer owners can get nearly 100 miles of range in 10 minutes. Charging at home with a 240-volt Level 2 charger takes less than 30 hours.

The Hummer EV comes with Super Cruise, GM’s hands-free driving assistance feature, and has a removable four-panel infinity roof that fits snuggly in the “frunk” or front compartment.

The coolest part of the new Hummer may be what’s inside. A moon boot print on the driver door. Etchings of the Sea of Tranquility on the speakers. Gauges that resemble an altimeter.

“The previous Hummer was military inspired. This Hummer has the aesthetics of lunar vehicles,” Rich Scheer, lead designer of the Hummer, told ABC News. “We wanted to go to production in a short amount of time and we felt like we were going to the moon. The design studio was inspired by the [Apollo 11] program.”

There are also two massive screens inside the vehicle — a 13.4-inch diagonal infotainment screen and a 12.3-inch diagonal driver information center display — and six driving modes are offered. The vehicle’s rear wheels and front wheels can steer at the same angle at low speeds and the suspension height can be raised approximately six inches for extreme off-road situations. The Hummer’s off-road capabilities include scaling 18-inch verticals and driving through water that’s more than 2 feet deep, according to GMC. The vehicle’s weight, towing capacity and payload have not been announced.

“It’s been long days and nights and we haven’t lost a day since the pandemic,” he told ABC News. “We’re building the first Hummer now. We’ll learn and delete and fix and improve things over the next 30 weeks.”

“Wealthy people will want these. People liked the concept of the original Hummer,” he told ABC News. “There is a lingering desire for the brand and what it represented — that alpha male, tough image.”

The biggest concern going forward will be long-term demand, he argued.

“If you can make an EV appealing to wealthy people, you can sell a lot of them,” he said. “Other than Tesla, it’s not easy to sell EVs to people.”

EVs accounted for a meager 1.7% of new vehicle registrations in August, far less than the percentage of vehicles with manual transmissions, according to Stephanie Brinley, principal automotive analyst at IHS Markit.

“Whatever the Hummer does [in sales] is irrelevant,” she told ABC News. “It’s changing how people think about EVs. You have to make changes in your lifestyle to drive an EV.”

Tesla and GM alone probably won’t convince Americans to give up their internal combustion engines. A national charging infrastructure and customer education are essential to the success of EVs, she said.

“It’s clearly proven there’s demand for Teslas but that hasn’t translated to the industry,” she said. “The EV market is a long-term play. We’re not going to see big volumes for decades.”

The Hummer will be marketed to all types of drivers and Aldred is convinced new customers — including those without a Tesla in their garage — will be drawn to its premium interior, modern looks and off-roading abilities.

“It’s not aimed squarely at pickup truck buyers,” he said. “It will attract people who buy luxury and exotic makes, sports cars, people who like expensive toys.”

He added, “The Hummer EV is better than anything on the market. It’s the most capable and technologically-advanced truck in GMC.”