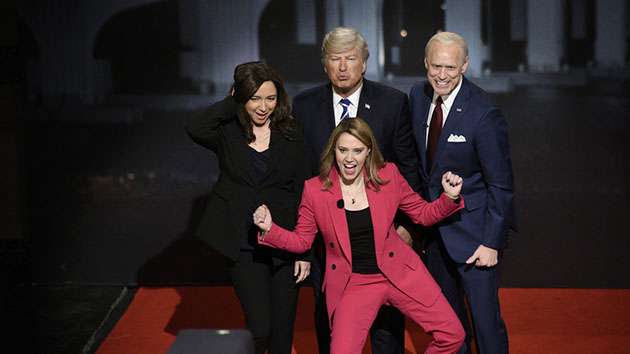 The two events were a topic of discussion even before the two contenders took their respective stages, with NBC facing a backlash for scheduling its town hall with President Trump opposite Biden’s previously planned town hall, moderated by George Stephanopoulos — played by Mikey Day.

Kate McKinnon, playing Today anchor and “surprise bad**s” Savannah Guthrie, who moderated the NBC event, declaring, “If you are angry at NBC for doing this town hall, just let me get a few questions in, and I think you will thank me.”

The bit poked fun at the candidates’ contrasting styles: a long-winded Biden — played once again by Jim Carrey — singing “Beautiful Day in the Neighborhood,” the theme from Fred Rogers’ long-running PBS kids show Mister Rogers’ Neighborhood, and even donning a sweater, as Rogers was famous for doing.

Recalling a viral moment from Trump’s town hall, McKinnon’s Guthrie chastises Baldwin’s Trump over his penchant for re-tweeting conspiracy theories, saying, “You can’t just do things like that. You are not just someone’s crazy uncle.”

Baldwin responds with “Right now is a preview of Thanksgiving dinner, and a lot of American households have crazy uncles.  Stand back and stand by.”

Maya Rudolph also made an appearance as Senator Kamala Harris.