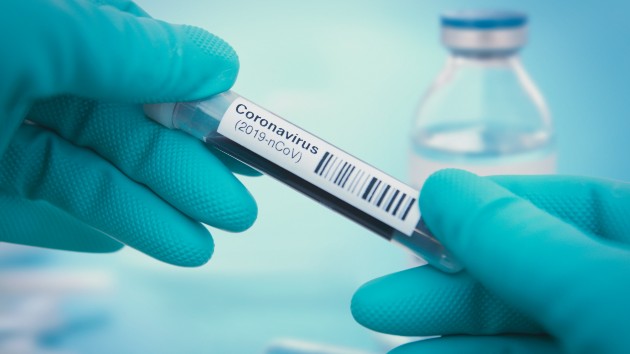 Over 40 million people across the globe have been diagnosed with COVID-19, the disease caused by the new respiratory virus, according to data compiled by the Center for Systems Science and Engineering at Johns Hopkins University. The criteria for diagnosis — through clinical means or a lab test — has varied from country-to-country. Still, the actual numbers are believed to be much higher due to testing shortages, many unreported cases and suspicions that some national governments are hiding or downplaying the scope of their outbreaks.

The United States is the worst-affected country, with more than 8.1 million diagnosed cases and at least 219,674 deaths.

California has the most cases of any U.S. state, with more than 875,000 people diagnosed, according to Johns Hopkins data. California is followed by Texas and Florida, with over 854,000 cases and over 755,000 cases, respectively.

More than 1 million people went through airport security checkpoints across the United States on Sunday for the first time since the start of the coronavirus pandemic.

The Transportation Security Administration said it screened 1,031,505 individuals on Sunday, the most since mid-March. Although that figure is still some 60% lower than this time last year, it’s a significant jump from a low of 87,534 people screened on April 14.

Oct 19, 9:19 am
Wales to enter two-week ‘firebreak’ lockdown from Friday

Wales will become the second nation in the United Kingdom to enter a lockdown to combat a second wave of COVID-19 infections.

The Welsh government announced on Monday its decision to impose a two-week “firebreak,” beginning Friday at 6 p.m. Everyone will be required to stay home and non-essential businesses, such as bars, gyms, restaurants and retail shops, must close until Nov. 9. There will be exceptions for critical workers and those who cannot do their jobs from home.

Libraries and places of worship will also be shut down across the country.

“This is the shortest we can make it, but that means it needs to be sharp and deep to have the impact against the virus we need it to have,” Welsh First Minister Mark Drakeford said Monday.

Northern Ireland started a “circuit breaker” lockdown last Friday, closing schools for two weeks while banning most social gatherings and shutting down many business for a month.

Senior Palestinian official Saeb Erekat was placed in a medically-induced coma and is listed in critical condition at an Israeli hospital, where he’s being treated for COVID-19 complications.

Erekat was transported by ambulance from his home in the Israeli-occupied West Bank to Hadassah Medical Center in Jerusalem on Sunday, more than a week after he had announced testing positive for COVID-19. The 65-year-old has a history of health problems and received a lung transplant in the United States in 2017.

“Mr. Erekat had a quiet night but this morning his condition deteriorated, which is now defined as critical, and due to respiratory distress, he was resuscitated and placed under general anesthesia,” Hadar Elboim, a spokesperson for Hadassah Medical Center, told ABC News in a statement Monday.

“Mr. Erekat poses a huge challenge to the treatment of corona as he is lung transplanted with suppression of the immune system, and with bacterial infection in addition to corona,” Elboim added. “Hadassah, with its most senior professional physicians, is in international medical contact regarding the policy of treating such a complex patient. Hadassah will continue to update his family as usual regarding his condition and will update the Palestinian Authority as he is a senior official there.”

Erekat, who serves as the secretary-general of the Palestine Liberation Organization, is one of the most senior advisors to the Palestinian president. He is a longtime proponent of a two-state solution to the Israeli-Palestinian conflict.

New York Gov. Andrew Cuomo said he’s not confident in the Food and Drug Administration’s approval process for a COVID-19 vaccine, and that the American public shouldn’t be either.

“I’m not that confident, but my opinion doesn’t matter. I don’t believe the American people are that confident,” Cuomo told ABC News chief anchor George Stephanopoulos in an interview Monday on Good Morning America.

“I think it’s going to be a very skeptical American public about taking the vaccine, and they should be,” he added.

Cuomo said he plans to assemble a group of doctors and medical experts to review any COVID-19 vaccine approved by the FDA before affirming its efficacy and safety for New York state residents.

“But I believe all across the country you’re going to need someone other than this FDA and this CDC saying it’s safe,” he said, before adding that the two federal agencies don’t “have any credibility.”

The New York governor also expressed concern over comments Dr. Anthony Fauci, director of the National Institute of Allergy and Infectious Diseases, made during an interview that aired Sunday on CBS’ 60 Minutes, in which he admitted that the White House has restricted “many, many, many” of his media appearances since the start of the coronavirus pandemic.

“You have Dr. Fauci now saying that they basically tried to muzzle him,” Cuomo said. “He has the highest credibility in the nation on this issue.”

Further restrictions aimed at curbing the spread of COVID-19 came into effect in Italy on Monday, after a sharp rise in infections.

Under the new measures, all bars, pubs and restaurants across the European country must close from midnight until 5 a.m., while gambling venues must close at 9 p.m. Restaurants are allowed to serve no more than six people per table and only after 6 p.m.

Local festivals are now banned, and mayors can close streets and public squares after 9 p.m. to halt gatherings.

Italian Prime Minister Giuseppe Conte warned that gyms and swimming pools may also be shut down next week if they don’t follow the safety protocols.

“These measures are aimed to avoid another lockdown,” Conte said Sunday while announcing the new rules. “The country cannot face another lockdown that would compromise the economic fabric of the country.”

The move comes after Italy, once the epicenter of the coronavirus pandemic, confirmed 11,705 new cases of COVID-19 over the weekend, an all-time high.

Russia confirmed another 15,982 new cases of COVID-19 in the last 24 hours, its highest daily tally yet.

An additional 179 deaths from COVID-19 were also registered in the past 24 hours, down from last week’s peak of 286. The cumulative totals now stand at 1,369,313 cases and 23,723 deaths, according to Russia’s coronavirus response headquarters.

The country of 145 million people has the fourth-highest tally of COVID-19 cases in the world, behind only the United States, India and Brazil.

More than 33% of the newly confirmed cases — 5,376 — and over 28% of the newly registered deaths — 51 — were reported in the capital, Moscow, according to country’s coronavirus response headquarters.

Although Russia has been breaking its own records for daily case counts and deaths almost every day since Oct. 9, authorities there are resisting shutting down businesses again. Few measures have been imposed in Moscow, the epicenter of the country’s COVID-19 outbreak and recent surge.

More than 40 million people around the world have been diagnosed with COVID-19 since the start of the pandemic, according to a real-time count kept by Johns Hopkins University.

The global tally crossed the 40 million mark on Monday morning in yet another grim milestone of the pandemic.

The United States has the highest number of diagnosed cases of any country, with more than 8.1 million, but is closely followed by India, which has over 7.5 million. Brazil, Russia and Argentina are also in the top five, according to Johns Hopkins data.

Senior Palestinian official Saeb Erekat, who is battling COVID-19, was taken by ambulance to a hospital in Israel on Sunday, according to the Palestinian Liberation Organization.

Erekat, who lives in the town of Jericho in the Israeli-occupied West Bank, disclosed earlier this month that he had contracted COVID-19. The 65-year-old has a history of health problems and received a lung transplant in the United States in 2017.

“Following his contraction of COVID-19, and due to the chronic health problems he faces in the respiratory system, Dr. Erekat’s condition now requires medical attention in a hospital,” the Palestinian Liberation Organization said in a statement Sunday.

Erekat’s brother told Agence France-Presse that “his situation is not good.”

Erekat, who serves as the secretary-general of the Palestine Liberation Organization, is one of the most senior advisors to the Palestinian president. He is a longtime proponent of a two-state solution to the Israeli-Palestinian conflict.

Since the start of the coronavirus pandemic, there have been more than 42,490 confirmed cases of COVID-19 with at least 381 deaths in the West Bank.

Oct 19, 5:16 am
Nationwide mask mandate and other new restrictions take force in Switzerland

A nationwide mask-wearing mandate and other new restrictions took force in Switzerland on Monday, amid a growing number of COVID-19 infections.

People must now wear face masks in publicly accessible indoor spaces and at all public transport access points across the Central European country, including airports, bus and tram stops, railway stations, restaurants, shops and theaters. Masks have already been required on all public transport since July.

Moreover, spontaneous gatherings of more than 15 people in public areas are no longer permitted. Masks are now required for all private events with more than 15 people. People may only consume food and drink while sitting down, and the contact details of all those taking part must be recorded.

In addition, patrons in all restaurants and entertainment venues also may only consume food and drink while sitting.

The federal government is again recommending people to work from home, as it did in March.

The Swiss Federal Council announced the new measures on Sunday.

Switzerland has confirmed more than 74,000 cases of COVID-19 and at least 1,823 deaths since the start of the pandemic, according to the latest data from the Swiss Federal Office of Public Health.

There were 48,210 new cases of COVID-19 identified in the United States on Sunday, according to a real-time count kept by Johns Hopkins University.

The latest daily tally is down by nearly 10,000 from the previous day and also falls under the country’s record set on July 16, when there were 77,255 new cases in a 24-hour-reporting period.

An additional 389 coronavirus-related fatalities were also recorded Sunday, almost half the previous day’s death toll and down from a peak of 2,666 new fatalities reported on April 17.

A total of 8,154,935 people in the United States have been diagnosed with COVID-19 since the pandemic began, and at least 217,700 of them have died, according to Johns Hopkins. The cases include people from all 50 U.S. states, Washington, D.C. and other U.S. territories as well as repatriated citizens.

The number of new COVID-19 cases recorded in the United States continued to increase by double digits in week-over-week comparisons, while the number of new deaths from the disease ticked upward slightly, according to an internal memo from the U.S. Department of Health and Human Services that was obtained by ABC News on Friday night.