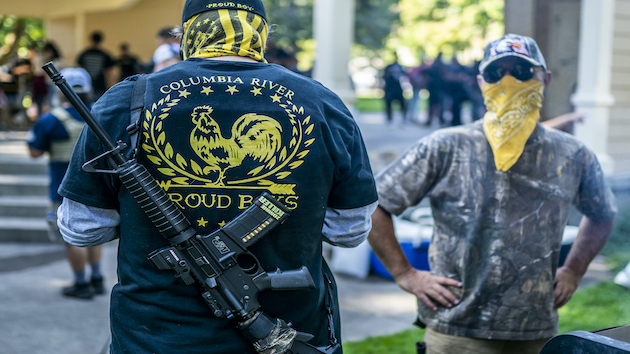 (NEW YORK) — Officials in multiple states are taking aggressive steps to protect voters from efforts by militias or other armed groups seeking to congregate near polling places on Election Day, as simmering online activity indicates that some groups are trying to register as campaign poll watchers for Donald Trump‘s campaign.

In Michigan, an open carry state, Secretary of State Jocelyn Benson on Friday announced a ban on open carry firearms at and near polls.

“Michiganders should know that law enforcement across multiple levels is working together to ensure that anyone who wishes to exercise their right to vote in person on Election Day can do so safely and without the threat of intimidation,” said Col. Joe Gasper, the state’s police director.

New Jersey Attorney General Gurbir Grewal issued a statement, also on Friday, that reiterated guidance for local law enforcement to help protect voters. Poll watchers “may not harass or intimidate voters, engage in electioneering, cause disturbances at polling places or challenge voters based on their race or ethnicity or how they are expected to vote,” the statement said.

The measures come as online accounts tied to neo-Nazi sympathizers and “alt-right” groups such as the Proud Boys have been generating posts that encourage supporters to join the campaign’s Election Day operations, according to two new reports this week. That includes sending out links to poll-watching registration sites for the Trump campaign’s so-called Army for Trump, an effort working to recruit thousands of supports to sign up as poll watchers for the campaign on Election Day.

In one instance, a Proud Boys-affiliated user, in a group that claimed to circulate to 1,800 people affiliated with the Proud Boys, shared the link to sign up, writing that Democrats “don’t want us Republicans to be in their polls,” according to the report from SITE Intelligence Group, a non-governmental agency group that tracks potential security threats online, that was released on Tuesday. A separate SITE report released on Thursday said a link was shared within a neo-Nazi channel that claims to have about 5,000 members.

“The call to watch the polls, initially made by President Trump himself in the first presidential debate, has been answered by several far-right groups,” the SITE report said.

Samantha Zager, deputy national press secretary for the Trump campaign, said in a statement to ABC News on Friday that the president “has unequivocally denounced hate groups by name on numerous occasions but the media refuses to accurately cover it because that would mean the end of a Democrat Party talking point.”

Zager did not reject these groups’ apparent interest in joining the campaign’s poll watching team when specifically asked by ABC News.

Poll watchers are legal under strict rules that vary by state. In most states, both parties are permitted to have trained representatives observe the voting process, relay information back to their parties, and watch for irregularities. They are not supposed to interfere with voting aside from reporting issues through official channels.

The SITE report said efforts by the Proud Boys or similar groups to volunteer for Trump “have so far not been followed with direct threats of voter suppression,” but it could be “inferred” that their “presence at election locations as ‘poll watchers’ would potentially serve to intimidate, pressure and harass oppositional voters.”

“Some of these groups will be listening to his false claims of fraud, and you put that in combination with his refusal to condemn white supremacists and civil unrest — it really is a very thinly veiled call for his most militant supporters to go to the polls,” Mary McCord, a longtime national security official and Georgetown University Law professor, previously told ABC News.

Experts have told ABC News they’re concerned over the Trump campaign’s use of the word “Army” in recruiting poll watchers.

“An ‘army’ doesn’t sound like people just there to observe,” said Sean Morales-Doyle, deputy director of voting rights and election programs at the Brennan Center for Justice. “An ‘army’ sounds like people there to engage in war with the enemy.”

ABC News’ Will Steakin contributed to this report.