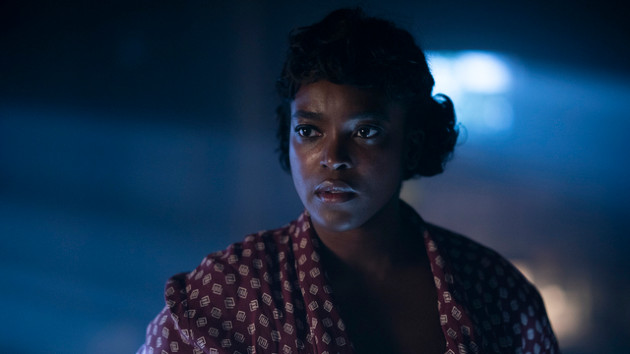 (NEW YORK) — Like the rest of the world, Lovecraft Country star Wunmi Mosaku will have to wait till Sunday night to watch the season finale of her hit HBO sci-fi series.

Mosaku, who plays Leti’s sister Ruby, a woman who uses magic to make her fantasies come true, admits she hasn’t seen episode 10 of the wildly popular series, but already knows that fans are going to be “blown away.”

“I really hope that people feel satisfied by the season finale,” Mosaku tells ABC Audio, before giving her stamp of approval. “It just takes you on a wild ride again. Like, you can never know what to expect with Lovecraft Country.”

So seems to be the case for her unpredictable character Ruby, who Mosaku admits doesn’t often make the best decisions.

“I was kind of shocked by her last episode,” Mosaku reveals. “I was like, ‘When is she going to stop all of this nonsense? … Why is she doing this?’ From the moment she opens her mouth with William at the bar, I’m like, ‘Who is this man that you’re telling all your business to?"”

But Mosaku does gives her character some credit, noting that magic can be “addictive” and Ruby does eventually evolve.

“So I don’t know where she’s gonna go, but she definitely grows and changes,” she says. “I think you’ll see a lot of her evolution even in this last episode…”

With that in mind, Mosaku applauds the series creator Misha Green, noting that it’s Green’s hard work that has kept fans invested in the show.

“She’s not playing,” Mosaku says. “She’s coming for us in all aspects, like emotionally, intellectually, socially, [and] politically. So I hope that people feel satisfied and like satiated by [this] episode for sure.