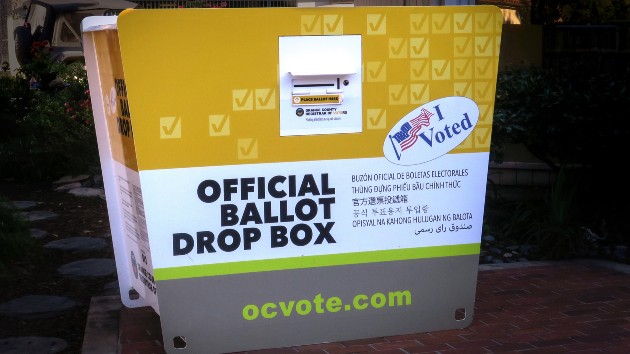 (NEW YORK) — With the nation still in the grips of the coronavirus pandemic, official ballot drop boxes have emerged as a popular option to accommodate the millions of new mail-in voters this year. But as Election Day draws near, some jurisdictions are running into unexpected obstacles.

The ability of voters to use secure drop boxes has encountered legal challenges in Texas and Ohio over the number of sites allowed. Election officials in Wisconsin faced two-week delays before receiving their drop boxes due to high demand, an issue one supplier said caused “panicking” in other states experiencing similar issues. And in California, Republican officials received a cease-and-desist order over their distribution of deceitful unofficial drop boxes to collect ballots.

These challenges shouldn’t keep people from voting — ballot drop boxes are just one of many secure drop-off options for voters who are looking to deliver their ballots to officials directly without using the mail — and drop boxes have gained popularity as the United States Postal Service has come under scrutiny. As for other options, voters in most states can also drop off their ballots at their local election offices, at voting locations, or have someone else drop off their ballot for them — though the laws are different in every state.

However, with nearly 35 states across the country using or planning to use drop boxes this year, “the use of ballot drop boxes during the 2020 general election will likely be larger than any election in American history,” according to a report by the Stanford-MIT run Healthy Elections Project.

At least 10 states have expanded drop box access in 2020, the report said, either by placing more physical boxes in communities or by opening satellite election offices where voters can drop their ballots. Michigan alone has opened dozens of new sites for voters to return ballots.

Experts and election officials praise the boxes as a safe and secure alternative to mailing ballots.

“Particularly during the pandemic, it’s crucial to have enough drop-boxes available to serve voters who are casting their ballots by mail,” said Edgardo Cortés, the former commissioner of elections in Virginia and an election security advisor at the Brennan Center for Justice. “It gives voters the option to drop their ballots off at their convenience in a secure manner, providing an additional level of comfort that their vote got there in time and will be counted.”

In Texas and Ohio, litigation

In Ohio and Texas, a fierce legal battle has erupted over the number of drop locations that will be permitted in the states. While some Democrats and county officials have attempted to bump up the number of locations in order to increase voter access, officials there have pushed back.

Texas Gov. Greg Abbott and Ohio Secretary of State Frank LaRose, both Republicans, each maintain that no more than one drop location should be allowed per county– a move that Democrats in Texas warned would force some voters to travel more than an hour across some of the state’s most sprawling counties in order to reach the locations. The government-run Cyber Security and Infrastructure Agency (CISA) recommends one box for every 15,000-20,000 residents, and Harris County, which includes Houston, has just one location for over four million residents.

This week, a federal appeals court cleared the way for a controversial order from Abbott to go into effect, limiting the number of drop locations in the population-rich state to just 254, less than the 282 drop locations available in Maryland, which has just one fifth of the population. The three appeals court judges, each appointed by President Donald Trump, argued that Abbott’s order did nothing to limit the ability of citizens to vote, noting people still had the option of mailing their ballots in.

In separate but parallel case, however, a state court on Thursday rejected the governor’s order to limit locations, which, if upheld, could potentially allow more drop locations to open in spite of the federal ruling. The Texas attorney general has already appealed the ruling.

Some voters, though, prefer to cast their ballots via drop boxes instead of mailing them back, according to the Elections Exchange Commission, because of concerns about meeting postmark deadlines and mistrust in the postal process.

“This campaign against drop boxes is part of a broader campaign that both the Trump campaign and the RNC have waged in litigation against the use of absentee ballot drop boxes,” said Wendy Weiser, the Vice President for Democracy at the Brennan Center, noting litigation over drop boxes has also been filed in Pennsylvania, Iowa, and New Hampshire.

A federal appeals court in Ohio, where early voting began last week, also sided with the state this week. The court there reinstated Secretary of State Frank LaRose’s rule limiting each of Ohio’s 88 counties to a single ballot drop box each, or one for every 133,000 residents, while it reviews the matter. LaRose had previously argued that he was constrained by state law from allowing multiple drop boxes per county.

Some states looking to increase the number of drop box locations have run into another issue, though: backorders and shortages for the metal boxes that have been in increasingly high demand.

Madison, one of the biggest cities in the swing state Wisconsin, began mailing out absentee ballots in September and had planned for their drop boxes to be ready in October, the city clerk there told ABC News, but none of the 14 boxes they ordered had arrived until this week.

“We are getting a lot of calls from voters who are just waiting for a drop box to be available, because that’s their preferred method for returning an absentee,” Maribeth Witzel-Behl, the Madison city clerk told ABC News.

And even if drop boxes are preferred, Wisconsin Elections Commission administrator Meagan Wolfe explained that there are still plenty of other in-person drop-off opportunities, like bringing it to local election officials.

“Historically, bringing a ballot into the city clerk’s office has been the drop-off opportunity,” Wolfe said, adding that communities have also gotten creative by using libraries or other public locations to offer up more drop-off locations.

A sales executive at a large drop box manufacturing and supply company told ABC News the company said it had a nearly two-month long backlog after receiving “thousands” of orders for the primary and general election.

“Because there was a shortage, I think people in certain times were scrambling,” said Samantha McMahon, from American Security Cabinets. “People were kind of panicking and needing them.”

In the past two weeks, though, the company has managed to bring its turnaround time back down to five days from two months after hiring more staff and ramping up production. The company says it is now “pretty caught up” and is still accepting more orders, she said.

Joel Hondorp, the city clerk in Grand Rapids, Michigan, said officials there did not encounter drop box shortages because they made their own, but said there were shortages of other election supplies, such as ballot collection bags. He likened it to trying to find toilet paper in March.

“If clerks are thinking of last-minute shopping, they might be out of luck,” he said. “There’s only so many suppliers.”

Some of the skepticism surrounding drop boxes is the concern that they open the potential for fraud, though evidence to support this idea is scarce. The Stanford-MIT report found that droboxes “are extremely safe against misuse” when coupled with common sense monitoring practices, such as video monitoring.

“Ballot drop boxes generally weigh over 600 pounds and are built to be more secure than the typical USPS mailbox,” the Stanford-MIT report said. “The tamper-proof mechanisms vary by manufacturer, but they often include special locks to prevent opening, as well as tamper evident seals and one-way entrance slots.”

In Colorado, which has used a majority vote-by-mail system for years and sees 75% of ballots returned by drop boxes, few issues have arisen, according to Secretary of State Jena Griswold, a Democrat.

“They’re safe, they’re secure, and Coloradans love them,” Griswold told ABC News, noting that the boxes are kept up 24-hour video surveillance and are bolted to the ground. “Colorado is proof of how well drop boxes work and how secure they are.”

In California, however, a different type of drop box issue is underway. While trying to stifle availability across the country, the Republican Party there this week admitted to putting out more than 50 unofficial drop boxes that were misleadingly labeled as “official” to collect ballots, according to the New York Times, prompting a cease-and-desist letter from state officials.

Hector Barajas, a spokesman for the California Republican Party, said the party would continue to distribute the boxes and that they were not illegal, according to the Times report.

In August, Trump slammed what he labeled as Democrat efforts to use drop boxes, falsely claiming without substantiation in a tweet that they were “a voter security disaster” and a “big fraud.” Twitter placed a notice on the tweet for violating the site’s “Civic Integrity Policy,” which the company says “could potentially dissuade people from participation in voting.”

Matthew Weil, the director of the Bipartisan Policy Center’s Elections Project, said the boxes are secure.

“We don’t have cameras on every single blue mailbox in this country, and yet we’ve been comfortable with voting by mail since the Civil War,” Weil said.

Hans von Spakovsky, the manager of the conservative Heritage Foundation’s Election Law Reform Initiative, told ABC News the problem arises when the boxes are unsupervised — a move he says is “asking for potential trouble.”

“The bottom line is that if election officials are going to set up drop boxes so people can drop off their absentee ballots, they need to have the same kind of security in place with ballot boxes [that there is] in polling places on Election Day,” von Spakovsky said.

As he ignores election defeat, Trump to pardon turkey
ICU nurse issues warning on Facebook as her dad is treated for COVID-19 on her floor
Ken Jennings will be 1st ‘Jeopardy!’ guest host as filming resumes
‘Jeopardy!’ resuming production next week with Ken Jennings as first guest host
Hospitals nationwide face shortage of medical staff amid spike in COVID-19 cases
Wildfires continue to burn in west as warmer temperatures head east