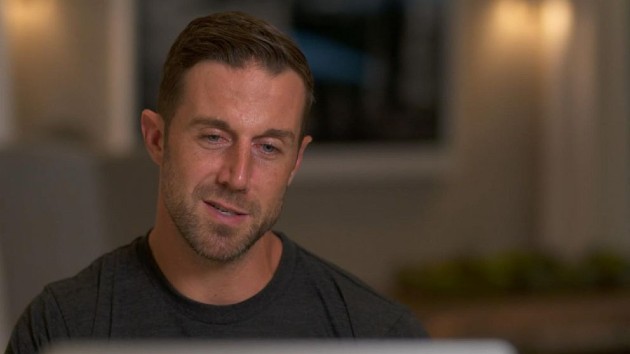 (NEW YORK) — After almost two years since Alex Smith suffered a severe leg injury with life-threatening complications, the quarterback made his triumphant return to the NFL gridiron on Sunday, which all but solidified his story as comeback player of the year.

Smith spoke to ABC News’ Good Morning America about the difficult journey he’s been on since being sidelined for 693 days after his personal perseverance, family commitment and human triumph were on full display when he took the field for the game between the Washington Football Team and the Los Angeles Rams.

On Nov. 18, 2018 Smith was sacked for the 410th time in his NFL career against the Houston Texans, but something was different.

“It seemed like just it’s just another one,” he recalled. “I certainly felt something strange down in my lower leg at that point. I will say to look down to see what had happened in and I knew right away that I had broken my leg.”

Smith broke the tibia and fibula in his right leg, sustaining both spiral and compound fractures that required 17 surgeries to repair, and later an infection that doctors feared could have led to amputation.

“I had absolutely zero idea that this may have obliterated my career,” Smith said.

“I was getting ready to go home and that the last thing I really remember, there was obviously my temperature spiking before I went home,” he remembered. “You know, looking down my leg once it was unwrapped and realizing actually that something was wrong.”

A bacterial infection had been eating away at Smith’s leg and his entire body went into septic shock, prompting concerns for his life from his doctors.

After that, Smith — the No. 1 draft pick in 2005 — said, psychologically, the sport and his professional career were the furthest things from his mind.

“I had a lot of time to myself … to sit and wonder if I’d ever be able to do those things that I, that I took for granted for so long. If I’d ever be able to go … going to walk with my wife, going to hike, play with my kids, you know, just everyday things,” he said candidly. “Football was never, at that point, in the picture. For me, that was the last of my concerns.”

Despite his past recovery from career setbacks such as multiple benchings, injuries and trades, nothing compared to the dark place he was in this time.

“I think that without a doubt in my life that certainly the hardest thing I’ve ever been faced with — it was going to be a long, long, long process to come back,” Smith explained.

His road to recovery started in San Antonio, Texas, at the Center for the Intrepid, a military hospital that specializes in limb recovery.

“I don’t know if I’d be here with it without their involvement in this process, not only from the expertise in the science and care but also from the motivation for me to go down there,” he said. “And that was really the first time that I ever thought about attempting to try and play football again.”

After multiple surgeries and a year of rehab, Smith got cleared to play again and his family surrounded him with champagne to celebrate the exciting news.

“There were so many ups and downs and complications along the way with it,” he said. “So to finally get the green light from all the doctors in agreement that my leg was it was good to go — it was very cool.”

Smith pushed through self-doubt and the rigors of NFL training camp to earn a spot on the team as a backup, which was a triumph in and of itself. Then after 693 days away from the action, his number was called during Week 5 in to replace Kyle Allen in the second quarter against the Rams.

As Smith ran onto the field, he said there was “a small moment there were I like, you know, here it goes. This is it. You know, I felt like I was ready.”

“I was so thankful we hadn’t had any fans in our first couple of home games and we had just progressed to just family,” Smith said of the new precautions due to the pandemic with his wife and kids in the stands. “So I knew going, you know, obviously that they were gonna be there. And for me, that’s all that mattered.”

Alex and his wife designed a T-shirt collection with Attitude is Free, a brand they felt paralleled his drive to stay positive through difficult obstacles.

The shirt has his motto “Just Live” printed on the front — a phrase that Smith has lived by and hopes it will motivate others to live in every moment. One hundred percent of proceeds will go to the Center For the Intrepid (CFI), the facility that he worked with and credits for his comeback.