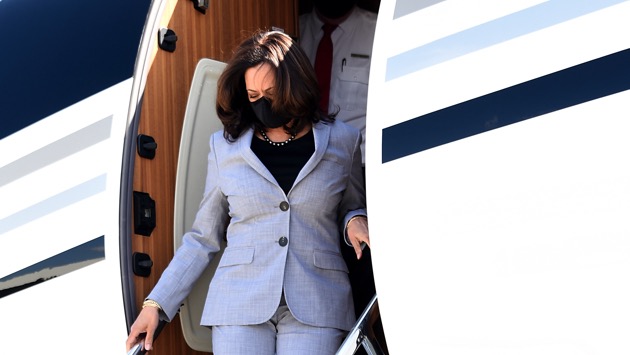 (NEW YORK) –Sen. Kamala Harris will not return to in-person campaigning until Monday after her communications director tested positive for COVID-19 Wednesday night.

Allen traveled with Harris to Arizona last Thursday and was with Harris for nearly a week in Salt Lake City for the vice-presidential debate. The campaign says it is temporarily suspending Harris’ travel out of “an abundance of caution.” Harris last tested negative for COVID-19 Wednesday and will be tested again Thursday.

“Neither of these people have had contact with Vice President Biden, Senator Harris or any other staffers since testing positive or in the 48 hours prior to their positive test results,” said Biden Campaign Manager Jen O’Malley Dillon in a statement.

Harris had a robust travel schedule planned for the next few days. She was slated to travel Thursday to Asheville and Charlotte, North Carolina, for the state’s first day of early voting. She was also expected to travel to Ohio and Pennsylvania this weekend.

Biden’s schedule will go on uninterrupted, according to O’Malley Dillion, because he was not in direct contact with either of the staffers who tested positive as defined by the CDC. Allen, however, was present during Biden’s joint event with Harris in Arizona.

The campaign has announced two negative COVID-19 tests for Biden since he traveled to Phoenix with Harris: One on Saturday when he traveled to Erie, Pennsylvania, and one on Monday when the former vice president traveled to Ohio.

When pressed on whether the campaign can continue a robust travel schedule given the rising rates of COVID-19 across the country, including in key battleground states like Wisconsin, the campaign says there is an ongoing discussion about the safety of travel in the final 19 days of the campaign.

“We’re confident that we have the process and protocols in place to be able to do that safely as we’ve had throughout. But we’re also very mindful, you know, as we see this uptick in COVID, that safety is the most important element of what we’re doing and ensuring that nobody’s in harm’s way, and we’ll continue to do that,” O’Malley Dillon said.