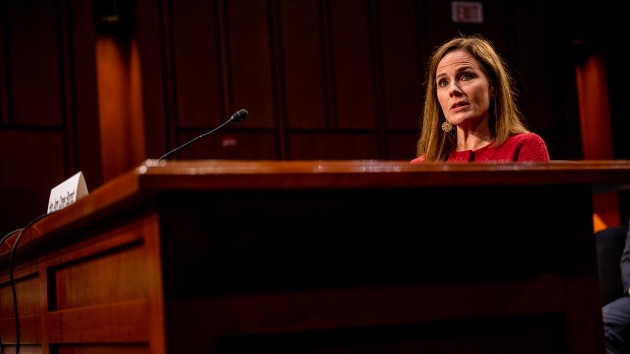 (WASHINGTON) — The Senate Judiciary Committee spent Tuesday questioning Supreme Court nominee Judge Amy Coney Barrett, in a marathon session that featured exchanges about judicial independence, the future of the Affordable Care Act and any election-related cases that could come before the Supreme Court later this year.

Here are the key takeaways from the second day of the hearings:

“I’m not hostile to the ACA, I’m not hostile to any statute that you have,” Barrett told Sen. Dick Durbin, D-Ill., who asked her about her criticisms of the Supreme Court’s majority opinions on several cases related to the health care law.

Sen. Amy Klobuchar, D-Minn., displayed President Donald Trump’s 2015 tweet vowing his judicial appointees would “do the right thing” in cases on President Barack Obama’s signature health care law, while questioning Barrett about how she would handle the subject.

Democrats also repeatedly pressed Barrett on Roe v. Wade, and whether she considers the landmark case to be settled law.

Asked by Sen. Dianne Feinstein, D-Calif., if she agreed with her mentor, the late Justice Antonin Scalia, that Roe v. Wade was wrongly decided, Barrett wouldn’t show her hand.

“If I express a view on the precedent one way or another, whether I say I love it or hate it, it signals to litigants I might tilt one way or another in a pending case,” she said, while also claiming she chart her own course on the highest court, despite her admiration for Scalia and his originalist approach to the Constitution.

Barrett also told Klobuchar she didn’t consider the decision a so-called “super-precedent” that could not be overruled, unlike Brown v. Board of Education.

“I’m answering a lot of questions about Roe v. Wade, which I think indicates Roe v. Wade doesn’t fall in that category,” she said.

Barrett says she can set aside her faith on the bench

Barrett, mostly in response to Republicans’ questions about her faith and its influence on her work, told the committee that her “personal, moral religious views” won’t impact her judicial decision-making.

“Can you set aside whatever Catholic beliefs you have regarding any issue before you?” Chairman Lindsey Graham, R-S.C., asked.

“I have done that in my time on the 7th Circuit. If I stay there I’ll continue to do that,” Barrett said. “If I’m confirmed to the Supreme Court, I will do that still.”

She was questioned about a 2006 newspaper ad she signed that called for overturning the “barbaric legacy” of Roe v. Wade.

“I signed that almost 15 years ago in my personal capacity still as a private citizen, and now I am a public official,” Barrett told Sen. Josh Hawley, R-Mo.

“I signed it on the way out of church,” she told Leahy. “It was consistent with the views of my church and simply said we support the right to life from conception to natural death.”

She also sought to make a distinction between her personal feelings and her work on the bench, when asked by Sen. Dick Durbin, D-Ill., about systemic racism and the death of George Floyd while in police custody.

Barrett said she had watched the video showing a Minneapolis police officer pressing his knee into Floyd’s neck with her 17-year-old daughter Vivian, who is Black and was adopted from Haiti, and that they “wept together,” and have had a “difficult” ongoing conversation about police brutality and racism.

Asked by Durbin whether she views racism in America as a systemic problem, Barrett said it is “entirely uncontroversial that racism persists” in America, but she declined to opine on the “policy questions” of how to address it the issue.

Sen. Pat Leahy, D-Vt., first pressed Barrett on whether she would recuse herself from election-related cases — citing Trump’s comments in September that he wanted the court to have a full complement of judges for any lawsuits stemming from the general election.

Larsen made her decision “once it was presented to her in the context of an actual case where she had to weigh her obligations,” Barrett said. “If presented to me I would, like Judge Larson, apply that statute.”

“I certainly hope that all members of the committee have more confidence in my integrity than to think that I would allow myself to be used as a pawn to decide this election for the American people,” she said.

Under questioning from Sen. Dianne Feinstein, D-Calif., Barrett declined to say whether the president has the authority to delay the general election.

But the response was a notable one, given that the Constitution does not provide any power to the president to change the date of the general election: any change would have to be made through an act of Congress.

“If that question ever came before me, I would need to hear arguments from the litigants and read briefs and consult with my law clerks, and talk to my colleagues and go through the opinion writing process,” she said. “If I give off-the-cuff answers, then I would be basically a legal pundit. I don’t think we want judges to be legal pundits.”

While Trump has suggested delaying the election, lawmakers from both parties have condemned his comments and rejected the possibility of doing so.

Barrett was also questioned on voter suppression by Klobuchar, and declined to say whether she believed voter intimidation at polling locations is illegal under federal law, calling it a “hypothetical situation.”

“I can’t apply the law to a hypothetical set of facts,” she said. “I can only decide cases as they come to me litigated by parties on the full record after fully engaging precedent, talking to colleagues, writing opinions. I can’t answer questions like that.”

Barrett, in response to questions from Sen. Cory Booker, D-N.J., also said she couldn’t comment on whether a president had the right to pardon himself, saying that the matter could come before the court.

“In keeping with my obligation not to give hints, previews or forecasts of how I would resolve the case, that’s not one I can answer,” she said.

Sen. Mitt Romney on Tuesday condemned “vile” political rhetoric from Trump and liberal pundit Keith Olbermann ahead of the election.

The president took to Twitter to insult Democrats on the committee, warn about a “rigged” election and mock Dr. Anthony Fauci’s botched first pitch at the Washington Nationals’ first game of the season in July.

Yet the tone inside the nomination hearing over roughly 10 hours Tuesday was polite for modern standards in Washington, with few fireworks and even fewer cases of senators and the nominee talking over each other. It was a noted contrast from the contentious nomination hearings for Justice Brett Kavanaugh, whose nomination was rocked by claims of sexual assault that emerged in the middle of the confirmation fight.

“Would you like to say something? I don’t want to cut you off,” Durbin said.

Later when pressing Barrett on a rape scenario, Sen. Richard Blumenthal interjected to say, “I apologize for interrupting you, pressed for time. Respectfully, I want to share another health care story with you.”

Barrett, who coolly fielded questions from senators for hours without any prepared notes in front of her, seemed to acknowledge a misstep Tuesday when she apologized for using the term “sexual preference,” a phrase rejected by the LGBTQ community and advocates who say it suggests that gender identity or sexual orientation is a choice.

“In saying that I couldn’t opine on whether that was rightly decided or not I was not indicating disagreement with it,” she said of Obergefell v. Hodges, the landmark 2015 case recognizing same-sex marriage, in a clarification of her comments prompted by Sen. Joni Ernst, R-Iowa.

“I certainly didn’t mean, and would never mean to use a term that would cause any offense in the LGBTQ community. If I did, I greatly apologize for that,” Barrett added.