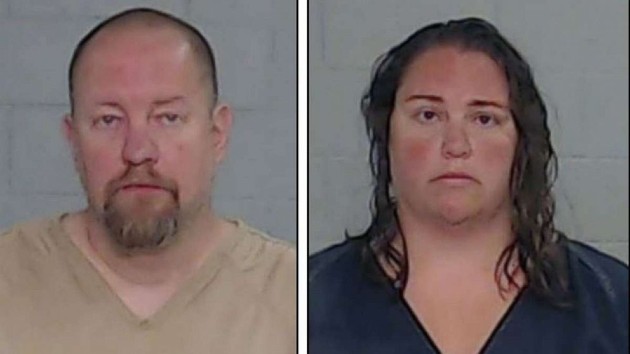 (ODESSA, Texas) — Two people have been arrested following a capital murder investigation of an 8-year-old girl who died after being forced to continuously jump on a trampoline in extreme heat as a punishment, according to police.

Odessa Police in Odessa, Texas, charged 44-year-old Daniel Schwarz and 34-year Ashley Schwarz with Capital Murder “Capital Felony” on Oct. 12 after an investigation stemming from an incident that occurred on Aug. 29 when Odessa Police responded to a medical call at the couple’s home where they found the dead 8-year-old girl.

“[The] investigation revealed that the 8-year-old child had been punished and was not allowed to eat breakfast and was required to jump on the trampoline without stopping for an extended period of time,” the Odessa Police Department said in a statement. “Further investigation revealed that the 8-year-old child was not allowed to drink any water because she was not jumping.”

“On October 8, 2020, the Odessa Police Department received the final autopsy report, which listed the manner of death as homicide and the cause of death to be dehydration,” police confirmed in their statement.

Odessa Police Department spokesperson Cpl. Steve LeSueur told the Odessa American that he could not confirm if the child was in foster care or not but that Daniel Schwarz and Ashley Schwarz were the non-biological parents of the 8-year-old girl.

Daniel and Ashley Scwarz have now been charged and arrested accordingly, according to the Odessa Police Department, and they have been taken into custody at the Ector County Law Enforcement Center.