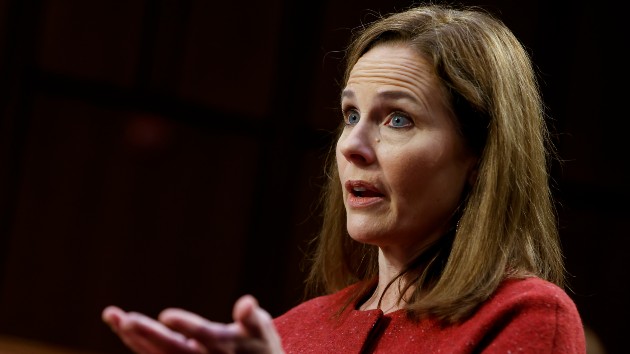 The question and answer portion began Tuesday with Democrats arguing protections from landmark cases on health care and same-sex marriage are at risk with Barrett’s nomination, while Republicans afforded her opportunities to defend her impartiality as a judge.

Oct 14, 7:29 am
Road to Senate majority could run through SCOTUS hearings

This week’s hearings for Judge Amy Coney Barrett are odd in at least one respect: They appear unlikely to influence the decision of a single senator when it comes time to vote on her confirmation for the Supreme Court.

But the hearings could matter a great deal when it comes to determining who will sit in similar rooms next year and beyond. Four potentially vulnerable Republican senators sit on the Senate Judiciary Committee on the eve of elections that look increasingly dire for their party.

That list includes Chairman Lindsey Graham, R-S.C., who opened Tuesday’s hearing with a riff about how Obamacare has been a “disaster” that he argued is laying the groundwork for Democrats to impose a single-payer system.

“That’s a political debate we’re involved in,” said Graham, in what he acknowledged wasn’t actually a question to Barrett.

Democrats on the committee include Sen. Kamala Harris, the Democratic nominee for vice president, along with a range of potential Biden administration Cabinet picks. Their goal for the week is less about changing colleagues’ minds than it is highlighting what a conservative-leaning court could mean for matters of policy.

To that end, Barrett said repeatedly that she has no predetermined position on the Trump administration’s challenge to the Affordable Care Act — a case scheduled to go in front of the Supreme Court just days after the election.

Barrett also said she would “consider” recusing herself from a case that arises from a dispute in the election.

And in one striking exchange, her care in not prejudging outcomes left her declining to say whether the president has any right under the Constitution to delay an election — a power he clearly does not have.