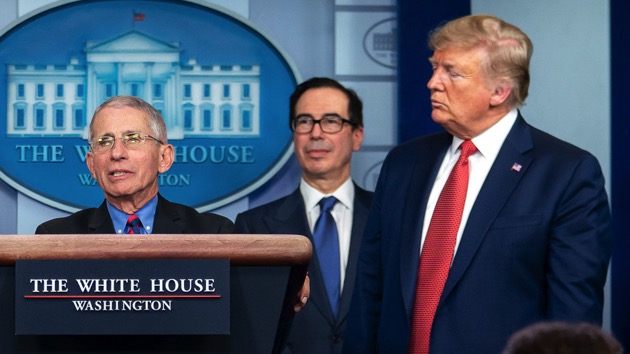 (WASHINGTON) — President Donald Trump on Tuesday attacked the federal government’s foremost infectious disease expert, Dr. Anthony Fauci, after taking him out of context in a campaign advertisement that Fauci has called for to be removed.

Trump’s latest salvo against the public health leader included multiple falsehoods and came as Trump struggles to win public approval for his handling of the coronavirus pandemic just three weeks before Election Day.

Sharing a tweet about the ad, Trump referred to Fauci’s less-than-perfect first pitch during the Washington Nationals’ season opener this year, writing, “Tony’s pitching arm is far more accurate than his prognostications.”

Paradoxically, Trump insulted Fauci’s “prognostications” while also using Fauci in a campaign ad in a way that misleadingly made it sound like the public health official was praising Trump.

The spot featured a narrator saying, “President Trump tackled the virus head on, as leaders should,” immediately followed by Fauci’s comments from a March interview with Fox News in which he complimented the federal government’s efforts against the coronavirus. “I can’t imagine that anybody could be doing more,” Fauci said, not referring to the president specifically.

Fauci, the director of the National Institute of Allergy and Infectious Diseases, told ABC News and other news outlets in a statement Sunday that in nearly five decades of public service, he had “never publicly endorsed any political candidate.”

On Monday, he said in an interview with CNN that continuing to feature him “might actually come back to backfire on them,” calling his inclusion “really unfortunate and really disappointing.”

“I hope they don’t do that because that’s, that would be kind of playing a game that we don’t want to play,” he said.

Later Monday, he told The Daily Beast that he meant it could “backfire” by “turning some voters off.”

“By doing this against my will they are, in effect, harassing me,” Fauci said. “Since campaign ads are about getting votes, their harassment of me might have the opposite effect of turning some voters off.”

In his tweet Tuesday morning, Trump also made up a quote from Fauci that the doctor never said — “No problem, no masks” — implying Fauci initially did not support mask wearing.

While it is true that Fauci and other health experts did not initially call for the widespread use of face coverings, as experts’ understanding of how the virus spread evolved — and mask shortages were addressed — Fauci and other public health officials repeatedly pushed for their usage.

“Anybody who has been listening to me over the last several months knows that a conversation does not go by where I do not strongly recommend that people wear masks,” he told ABC News’ “Start Here” podcast earlier this month.

Trump, meanwhile, has mocked face coverings, contradicted public health experts and flouted precautions recommended by a wide variety of private and public health officials, including those, like Fauci, on his own coronavirus task force.

After contracting COVID-19 himself, Trump returned to the campaign trail this week, speaking to massive crowds with few masks and no social distancing — events heavily criticized by health experts and which have in the past contributed to spikes in coronavirus cases.

The president had half a dozen rallies scheduled for this week alone, and his campaign anticipated a packed schedule through Nov. 3.

Fauci told CNN Monday that, as a matter of public health, Trump’s rallies are “asking for trouble.”

Polls have consistently shown Americans disapproving of his handling of the pandemic by wide margins — and that they have more trust in his Democratic opponent, former Vice President Joe Biden, to tackle the virus.

In an ABC News/Washington Post survey released Sunday, in the aftermath of Trump’s COVID-19 diagnosis, two-thirds of registered voters said Trump failed to take appropriate precautions against the coronavirus, 62% said they distrusted what he says about it and just 21% said the virus was under control.

Fifty-eight percent said they disapproved of how Trump has handled the pandemic — essentially steady since July — while 55% said they trusted Biden to handle it, as opposed to just 38% who trusted Trump.

In fact, one of the World Health Organization’s special envoys on COVID-19, Dr. David Nabarro, told The Spectator last week that “we in the World Health Organization do not advocate lockdowns as the primary means of control of this virus” and “by and large, we’d rather not do it” — but that they are “justified” when used “to buy you time to reorganize, regroup, rebalance your resources, protect your health workers who are exhausted.”