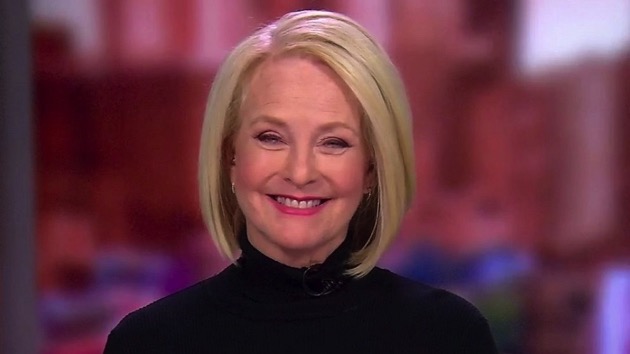 (NEW YORK) — Cindy McCain, the widow of Sen. John McCain and mother to The View co-host Meghan McCain, opened up about the loss of her mother-in-law Roberta McCain, the birth of her granddaughter Liberty, and her endorsement of Democratic presidential nominee Joe Biden.

“I’m so pleased to announce the birth of my third grandchild, Liberty Sage. A darling baby girl,” Cindy McCain tweeted on Sept. 29. “I know John is looking down!”

Cindy McCain gave an update on her granddaughter while guest co-hosting on The View Tuesday. “She’s beautiful. She’s just perfect.”

She said that Meghan McCain and her husband, Ben Domenech, are “so happy” and “doing really well.”

“Meghan couldn’t be happier and Ben as well,” she said. “They’re just two new parents that are just enjoying every second of it.”

Co-host Joy Behar told McCain after having seen Liberty: “That baby is 100% McCain. That is a McCain baby if ever I saw one!”

“It is with great sadness that I announce the death of my wonderful Mother In-law, Roberta McCain,” Cindy McCain posted on Twitter. “I couldn’t have asked for a better role model or a better friend.”

On The View, Cindy McCain said her mother-in-law was not only a “one-of-a-kind [person] that we all admired” but also someone whom she looked up to through the years.

“For me particularly, I not only looked up to her, but she was a great mentor and a great guide for me through the minefield of politics,” Cindy McCain said.

“I will miss her so much. I cannot tell you. She was such a lovely woman,” she added. “I’m just glad she’s with John now and they’re probably arguing politics and having a great time.”

In a series of tweets on Sept. 22, Cindy McCain crossed party lines to endorse Biden in the presidential election.

“My husband John lived by a code: country first. We are Republicans, yes, but Americans foremost,” she said in a tweet. “There’s only one candidate in this race who stands up for our values as a nation, and that is Joe Biden.”

My husband John lived by a code: country first. We are Republicans, yes, but Americans foremost. There's only one candidate in this race who stands up for our values as a nation, and that is @JoeBiden.

On The View, McCain spoke about her endorsement decision.

“The reason I did this is because I, like many Americans, want a country that’s more civil, that has a leader that not only has a plan for not just COVID but a plan for the country to dig it out of this mess,” she said.

Cindy McCain added that “more importantly,” she wants a leader that “respects our troops … our men and women who serve.”

“I just do not believe that my two sons are ‘losers’ and ‘suckers,"” Cindy McCain said, referring to a report in The Atlantic in which anonymous sources alleged that President Donald Trump made these comments toward fallen U.S. service members.

Trump has denied these accusations.

Although Cindy McCain said “there were a lot of reasons” to back Biden, “the culminating portion” came from Trump’s alleged comments.

Cindy McCain went on to say that her late husband and Biden “were a perfect example of what was right about America” because “they worked together” despite their differences.

“They didn’t always agree,” she said. “In fact, they rarely agreed completely on any issue. But they worked together for the good of the country, not the good of the party.”

“Kamala was a huge portion of making sure we … try those guys and put them away,” she said.

“She’s a brilliant mind, not only in that arena, but of course in many different issues as well,” McCain said, adding that Biden and Harris “make a good team.”