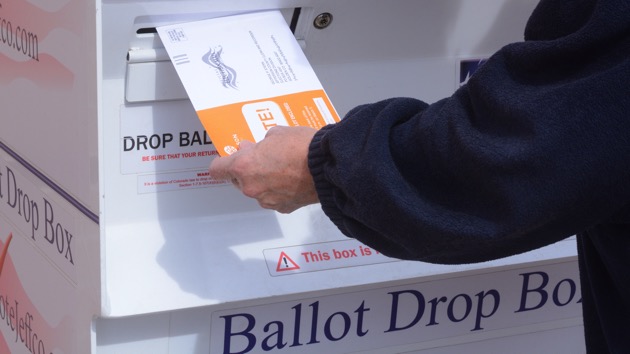 (SACRAMENTO, Calif.) — Top officials in California have sent a cease-and-desist order to the state Republican party after it admitted to propping up unauthorized ballot drop boxes in local party offices, candidate headquarters and churches around the state.

“Misleading voters is wrong, regardless of who’s doing it,” California Secretary of State Alex Padilla announced in a Monday evening news conference. “Political parties and campaigns can engage and get up to vote efforts, but they cannot violate state law.”

The order from Padilla’s office and the California attorney general followed a series of reports about unofficial ballot drop boxes surfacing around the state that were falsely promoted by state Republican officials as legitimate.

As first reported by the Orange County Register, a now-removed tweet by a regional field director for the California Republican Party last week had asked people to message him for “convenient locations” to drop their ballots, with a picture of himself posing next to an unauthorized drop-box labeled “Official Ballot Drop Box.” The Fresno GOP separately put up a page on its website advertising “ballot collection boxes” outside of gun stores, gas stations, health clubs and their party HQ.

CBS LA separately reported on a similar unofficial ballot drop box advertised on the Facebook page of Freedom’s Way Baptist Church in Castaic, which in addition to its sermons frequently posts messages critical of Democrats. The drop box has since been removed after a local election official told CBS LA it was not an authorized box.

In a memo to state elections officials, Padilla said the use of such unauthorized drop boxes run afoul of state law.

“County elections officials alone have the authority to designate the location, hours of operation, and number of drop boxes in the county, and have the responsibility for ensuring compliance with all applicable statutes and regulations that guarantee the security and chain of custody of vote-by-mail ballots deposited,” Padilla said. “Moreover, the use of unauthorized, non-official vote-by-mail ballot drop boxes does not comply with state law governing ballot collection activities.”

Later in the memo, Padilla notes that any person found to be in violation of the section of state election code governing ballot drop boxes could face a felony conviction with a potential sentence of as much as two to four years in prison.

Padilla said Monday’s cease-and-desist order demands the Republican party remove any other unauthorized drop boxes immediately and urged any Californians who may have dropped their ballots at such locations to track their votes at [email protected] to receive notifications on their ballot status.

Hector Barajas, a spokesperson with the state GOP, defended the unofficial drop boxes in a statement describing the reaction as “overblown” and pointing to a 2016 law passed by Democrats in the state that permitted voters to hand ballots over to any designated individual who would deliver the ballot.

“Democrats are now upset because organizations, individuals and groups are offering an opportunity for their friends, family, and patrons to drop off their ballot with someone they know and trust,” Barajas said. “The Democrat anger is overblown when state law allows organizations, volunteers or campaign workers to collect completed ballots and drop them off at polling places or election offices.”

Padilla, however, explained in his memo that this excuse doesn’t match with the letter of the law.

“When a voter drops off a ballot in an unauthorized, non-official vote-by-mail drop box, no designated ‘person’ would be signing, as required by state law,” Padilla said. “A person designated by the voter to return their vote-by-mail ballot envelope to the county elections official within the required time period by law, must provide their name, signature and relationship to the voter.”

Barajas didn’t immediately respond to a follow-up request for comment from ABC News when asked about the cease and desist letter.