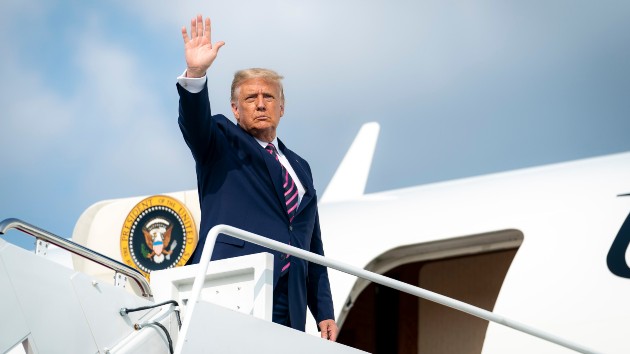 (WASHINGTON) — President Donald Trump returns Monday night to Central Florida, the same region where he kicked off his re-election campaign last year and one that political operatives say will prove critical this fall in the battleground state.

It will be the president’s first campaign event outside of Washington, D.C., since he announced his COVID-19 diagnosis 10 days ago.

Trump will speak to supporters in Sanford, just north of Orlando and situated in the center of the “I-4 Corridor,” political slang for a stretch of Florida named for the interstate that extends from Tampa to Daytona and bisects a string of counties that often predict the statewide vote.

The counties along the stretch have a variety of political identities.

There is Pinellas County, on the Gulf Coast, which has voted for the winner of each presidential general election since 2004, and Volusia, on the Atlantic, which has shifted to the right over the past decade after years of voting for Democratic presidential candidates.

Trump’s rally is in Seminole County, which has quietly turned purple after decades in Republican hands, thanks to Democrats’ voter registration efforts and an increase in high-density development that has drawn liberal-leaning voters. Although the county has not voted for a Democratic presidential nominee since Harry Truman in 1948, Democratic candidates have performed well there since 2016, including Andrew Gillum, who lost the race for governor in 2018 but won Seminole.

Compared to Florida overall, Seminole — like some of the surrounding counties — has a relatively high number of voters who are unaffiliated and may still be making up their minds more than two weeks after election officials began mailing out ballots.

“Traditionally, [the I-4 Corridor] is the mecca of what you would call the swing voter-rich part of the state,” Kevin Cate, a veteran Democratic strategist, told ABC News.

These swing voters present an opportunity for Trump Monday night, as he touches down in Florida trailing Biden in recent statewide polling.

To reach them he needs to hammer home an economic message, says Joe Gruters, chairman of the Florida Republican Party.

“Everything’s about economics,” Gruters told ABC News. “That’s one of his strengths. He has made it clear that he wants to get the economy moving again.”

Gruters believes that Trump addressing the economy Monday night will play particularly well with Hispanic voters, large numbers of whom have moved to Central Florida since the 2016 election.

According to research by Pew, Hispanic voter registration between 2016 and 2018 grew faster than the statewide rate in several counties along the I-4 Corridor.

That spike correlates with an influx of people from Puerto Rico in 2018, the year after Hurricane Maria devastated the island. Data from the U.S. Census Bureau indicates that nearly 45,000 Puerto Ricans arrived in Florida that year.

“Most people, no matter what demographic they’re a part of, want somebody who’s going to fight so you can bring more money home. The president has shown that he can deliver a stronger economy,” said Gruters. “With the president’s popularity with Hispanics, [Central Florida] is an area where we think we can do extremely well.”

An ABC News/Washington Post poll from late September showed Trump trailing Biden by 13 points with Hispanic voters in Florida, and more recent polling shows him behind by an even wider margin. Hillary Clinton won the Hispanic vote in Florida by 27 points in 2016.

In a statement released Monday morning, Biden said that Trump has “no plan to mitigate the economic impact the pandemic is having on families across Central Florida.” Biden then touted his own plan to invest in small businesses and create what he called “millions of new, good-paying jobs.”