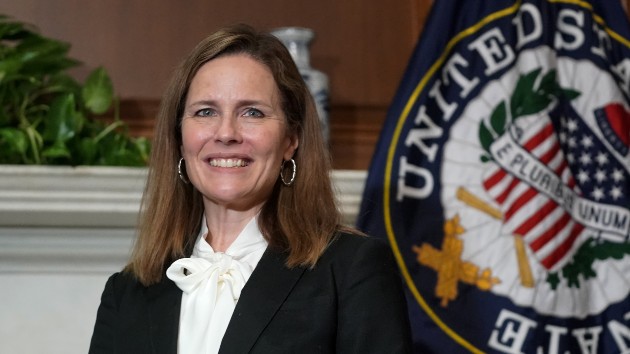 The four days of Senate Judiciary Committee hearings will be unprecedented, with some members participating virtually and in-person. Barrett will appear at the witness table to face questions.

The hearing begins at 9 a.m. and will be live streamed on ABC News Live.

Barrett, 48, a devout Roman Catholic, was a law clerk to conservative Justice Antonin Scalia, considers him her mentor and follows his originalist interpretation of the Constitution. She practiced law at a Washington firm for two years before returning to her alma mater, Notre Dame Law School, to teach. She was nominated by Trump to the Seventh U.S. Circuit Court of Appeals in May 2017 and confirmed by the Senate that October in a 55-43 vote.

Six in 10 registered voters say the U.S. Supreme Court should uphold Roe v. Wade as the basis of abortion law in the United States, and a majority in an ABC News/Washington Post poll — albeit now a narrow one — says the Senate should delay filling the court’s current vacancy.

Sixty-two percent in the national survey say they would want the court to uphold Roe, while 24% would want it overturned; 14% have no opinion. There are broad political, ideological and religious-based divisions on the question.

Separately, 52% say filling the seat opened by the death of Ruth Bader Ginsburg last month should be left to the winner of the presidential election and a Senate vote next year. Forty-four percent instead say the current Senate should vote on Trump’s nomination of Amy Coney Barrett to the position.

That’s a closer division than the 57%-39% preference for waiting in an ABC/Post poll late last month. That poll was conducted before Trump nominated Barrett and the Senate moved to proceed with her confirmation hearings, scheduled to start Monday.

Opposition to action has dropped among political independents, from 63% to 51%. Eighty-three percent of Democrats favor waiting to fill the seat, while 77% of Republicans in this poll, produced for ABC by Langer Research Associates, support action now.

Similarly, 77% of conservatives want action by the current Senate; 64% of moderates and 87% of liberals say wait. Among registered voters who want Roe upheld, 68% say the Barrett nomination should be set aside; among critics of Roe, 71% want the Senate to proceed.