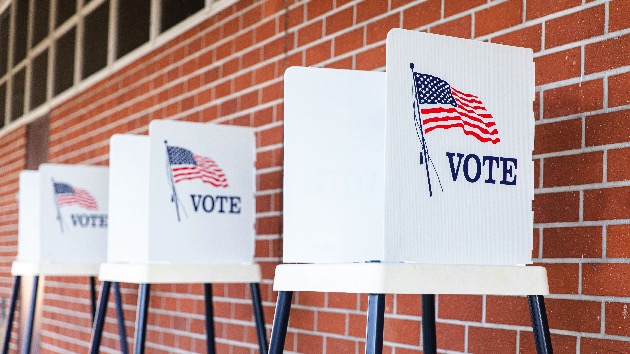 (WASHINGTON) — Las Vegas political operative Jesse Law is not coy about the chief goal of the Election Day poll-watching operation that the Trump campaign hired him to organize in Nevada.

“The main goal is electing the boss,” Law told a group of volunteers last week during an online training session that was recorded on video and shared with ABC News.

Law is one of more than a dozen Trump field generals organizing Election Day poll-watching operations in key battleground states and are now engaged in almost-daily training sessions preparing volunteers for long shifts watching the voting process unfold. The president’s campaign is calling it “Trump’s Army,” which they maintain will be a force of 50,000, now being prepped to spend hours quietly eyeballing voters, ready to summon attorneys at the first indication something is amiss.

Law emphasized that the goal is not to interfere with voters, but to flag issues to lawyers, especially if they believe they are witness to acts of voter fraud — something experts say is a rare occurrence. Rules vary by state, but the campaigns are allowed to have representatives watch the voting process unfold, so long as they don’t take steps to disrupt or interfere with those casting their ballots.

Both parties have poll-watching plans for 2020. The Biden campaign effort expects to have a presence at precincts in 21 key states, and is back-stopped by a legal team that includes former Attorney General Eric Holder and former Obama White House Counsel Bob Bauer. A campaign spokesman told ABC News the Biden operation has plans for “the largest voter protection program in history,” with “thousands” of lawyers and volunteers working on voter protection efforts.

But the widespread presence of Republican poll watchers at polling sites in 2020 will be something new. The party has been restricted from placing partisans inside precincts since the 1980s, when a court ruled that GOP volunteers were systematically harassing and intimidating voters in a manner that violated the Voting Rights Act. A 2018 court ruling lifted those restrictions for the first time in decades.

GOP had ‘one hand tied behind its back’

Justin Clark, one of the Trump campaign’s top lawyers, said while speaking on a panel about voter fraud at the Conservative Political Action Committee (CPAC) in March that the Republican Party had spent 40 years “fighting this battle with one hand tied behind its back.”

“In 2020, we have a brand new opportunity to be able to activate an Election Day operations program that’s really robust,” he said, describing a plan to recruit 50,000 volunteers to surveil the voting process.

Democrats have expressed a desire to match that presence with their own poll watchers. How many volunteers will ultimately participate remains uncertain, but the Trump campaign has already spent millions of dollars on the effort, federal election records show. The undertaking has involved several paid consultants, including Stampede America, a little-known firm run by veteran Republican political operatives that has received over $1 million from Republican-leaning groups to recruit Election Day workers.

Legal experts who reviewed videos of the Trump campaign training sessions at the request of ABC News say instructors like Law are using the right language, but that still may yield the wrong results.

“One of the major concerns about poll watching is that it will still lead, intentionally or not, to voter intimidation,” said Sean Morales-Doyle, the deputy director of voting rights and election programs at the Brennan Center for Justice, an ABC News partner.

“An ‘army’ doesn’t sound like people just there to observe,” Morales-Doyle said. “An army sounds like people there to engage in war with the enemy.”

Responding to that concern in a statement Sunday to ABC News, Clark pushed back: “This isn’t about intimidation but about transparency in the election process. Anything to the contrary is just demagoguery.”

Trump campaign officials said they view poll watchers as critical to ensuring the fairness of the election, a point the president tried to drive home during the first presidential debate. Trump referenced his plans to mobilize his supporters to monitor the polls, saying he is “urging my supporters to go in to the polls and watch very carefully.”

“You know why? Because bad things happen,” he said.

In videos of recent training sessions obtained and reviewed by ABC News, as well as dozens of pre-recorded state-specific instructional presentations that the Trump campaign distributed online, poll watchers are told explicitly to avoid directly engaging with voters. The training sessions, which were advertised on the official campaign website, were conducted by campaign officials including Law, who has been paid more than $35,000 by the campaign since May, according to federal filings.

“You guys have to watch your backs,” Law says at one point. “If you’re over there going, ‘Hey, that voter isn’t legal!’ and it’s just a person who is completely legal — that’s a black eye for us. Don’t do that.”

Instead, Law tells the trainees that if they are seeing a problem, “document it and talk to the attorneys about it and get to the bottom of it. No spectacles, please.”

“Uncovering fraud, exposing some controversy at the end of the day can pick you up anywhere from a quarter percent to two and a half percent [of the vote] based on what we’re doing,” he says.

Thea McDonald, the campaign’s deputy national press secretary, reiterated that point in response to questions from ABC News, saying poll watchers will be trained to ensure “all rules are applied equally, all valid ballots are counted, and all Democrat rule breaking is called out.”

But some experts are skeptical — saying everything will depend on the approach the poll watchers take on Election Day. Morales-Doyle said he is concerned that on the rare occasion that there is rule-breaking, either intentional or not, it should not be immediately portrayed the result of a widespread conspiracy. The training sessions, Morales-Doyle said, imply the opposite.

“That’s the tone that runs throughout and probably is the most concerning,” he said. “The whole goal of this enterprise is to catch a voter fraud conspiracy that doesn’t exist.”

Questions about some generals in Trump’s Army

Despite the warnings against conflict at the polls, some of the officials the Trump team has hired to assist with training poll watchers have had a combative history when it comes to voting questions.

During his recent training class, Law joked about a 2016 lawsuit in Nevada, which alleged Trump’s campaign had trained poll watchers to intimidate voters. He said the poll watching program had been accused of engaging in suppression of the vote for minority voters. “Best news is if you Google my name, that does not show up,” he said. “Maybe because we were successful.” Law referred ABC News’ request for comment to the national office.

In North Carolina, the Trump campaign has hired Ryan Terrill to oversee poll watchers. When Terrill worked on former North Carolina Gov. Pat McCroy’s gubernatorial bid in 2016, the campaign made repeated allegations of fraudulent voting in what critics called “an apparent effort to overcome a narrow defeat.”

Democracy North Carolina, a left-leaning nonprofit organization, maintained later that “despite an avalanche of legal filings” and the constant drumbeat of “serious voter fraud,” nearly all of the fraud allegations the campaign had leveled at 600 voters proved to be false. Voters who initially faced the allegations told the nonprofit at the time they were left “shocked” and “furious.”

ABC News was not able to reach Terrill directly for comment. The North Carolina Republican Party did not respond to multiple requests for comment about the report.

And just last week, one leader of Trump’s Pennsylvania Election Day effort had to be escorted out of a satellite election office in Philadelphia’s City Hall. Elections officials there accused James Fitzpatrick of causing a “disturbance,” a spokesperson for the Philadelphia Sheriff’s office told ABC News.

In Pennsylvania, poll watchers are not allowed in satellite offices, which are locations where voters can register to vote and request and return mail in ballots, among other things, and are not considered official polling locations. The Trump campaign has sued to enable poll watchers to monitor these locations, claiming “bad things are happening in Philadelphia,” though a judge tossed the suit over the weekend.

“Mr. Fitzpatrick went inside the facility, he was asked why he was there,” said Teresa Lundy, the spokesperson for the sheriff’s office. “And then he pulled out his cellphone and started doing video and taking photographs, and that’s when he was approached asked to leave.”

Fitzpatrick did not respond to email and phone messages from ABC News seeking comment. His video of the encounter was posted on Twitter by a Trump campaign staffer. A Trump campaign spokesperson told ABC News the incident was “another instance of Philly election officials denying observers access to the voting places.”

A few days after the incident, Fitzpatrick was back talking to Trump’s 2020 volunteers. On a video of a training session obtained by ABC News, he can be seen making clear his goal. Discussing an effort to review absentee ballot applications, he said: “We’re going to need people to go through them and issue challenges.”

“We think it all comes down to Pennsylvania this year,” he told the group. “We could use the help. Let us know if you’re interested.”