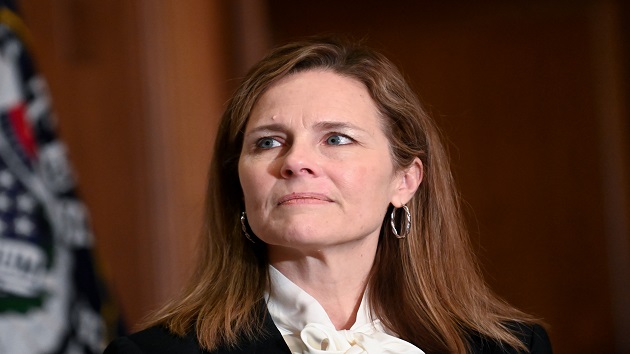 (WASHINGTON) — Supreme Court nominee Judge Amy Coney Barrett will focus on her family, morals and judicial philosophy when she appears before the Senate Judiciary committee Monday, according to a copy of her opening statement released Sunday.

The 48-year-old judge on the Seventh Circuit Court of Appeals, Notre Dame law professor and mother of seven wrote in her statement that she was “used to being in a group of nine — my family.”

Barrett, who was nominated to fill the seat left vacant by the late Justice Ruth Bader Ginsburg, references the lessons she learned from the late Supreme Court Justice Antonin Scalia, particularly as it pertains to her interpretation of the law, in her statement.

“The policy decisions and value judgements of government must be made by the political branches elected by and accountable to the people,” Barrett’s statement reads. “The public should not expect courts to do so, and courts could not try.”

The high-stakes confirmation hearings for Barrett are set to begin Monday as Republicans push for a vote before Election Day and Democrats try to stop her from turning the court sharply conservative for decades to come.

Judiciary Chairman Lindsey Graham has said he is “dead set” on getting Barrett confirmed and has held firm to a rushed timeline.

Democrats argue that the decision on filling the court vacancy should belong to whoever is elected as the next president.

President Donald Trump has made it clear he believes Senate Republicans should be squarely focused on quickly securing Barrett’s position on the court, and Graham and Majority Leader Mitch McConnell are doing everything they can to advance the nomination of a federal judge they call a “sterling” nominee.

The four days of hearings will look vastly different than previous hearings because of COVID-19 restrictions.

Sen. Mike Lee, R-Utah, and Sen. Thom Tillis, R-N.C., tested positive for the coronavirus after attending the White House Rose Garden ceremony to announce Barrett’s nomination. As a result, members have the option of participating in the hearings remotely. Barrett is expected to appear in person, Lee is “undecided” and Tillis said Tuesday on Fox News that he anticipated attending some days of the hearing virtually.

On Friday, Sens. Kamala Harris, D-Calif., Patrick Leahy, D-Vt., and Cory Booker, D-N.J., sent a letter to Graham demanding “stringent” testing for all those in attendance. Sen. Joni Ernst, R-Iowa, tweeted that she also supported testing for members. But Graham has not responded.

Leahy, who is 80 years old, has decided to stay away from the hearings because of Graham’s failure to respond. He and Harris have said they will participate remotely as a result.

Democrats are expected to mount additional challenges to safety of the hearing’s proceedings, an official confirmed to ABC News.

Masks are now a mainstay of hearings on the Hill.

Long lines of spectators snaking through the halls of the Hart Senate Office Building waiting to get a glimpse of the proceedings will also be gone as the public will not be allowed inside. Only members, Barrett’s guests, staff and journalists will be permitted.

Members who do appear will do so in bursts, an official confirmed to ABC News. They may appear to question Barrett but must return to their offices to watch the remainder of the hearing from a more isolated location.

The Democrats are also expected to use the hearings to cast Barrett as a threat to Americans with pre-existing conditions who are protected under the Affordable Care Act, reproductive rights under Roe v. Wade, workers rights and other liberal causes, in addition to her potentially casting a key vote in any election-related challenge that comes to the court.

Sen. Dick Durbin of Illinois, previewing his party’s strategy with reporters on Friday, referred to “the protection that the president believes he is buying with this nominee” will be a “starting point for virtually every Democratic senator on the committee.”

Durbin, and fellow Democrat Sen. Chris Coons said they expect to press Barrett on her writings that they say questioned the Supreme Court’s decision that upheld aspects of the ACA in 2012.

On Nov. 10, just one week after Election Day, the justices are set to hear arguments in a case brought by Republican-led states and endorsed by the Trump administration to completely invalidate the law.

“What I’m most concerned about is that in the middle of a pandemic, President Trump and 18 attorneys general are trying to overturn the Affordable Care Act and its protections,” Coons said. “The ACA is not just on the docket of the Supreme Court, it’s on the ballot in the fall.”

Connecticut Democratic Sen. Richard Blumenthal said he’ll use his time with Barrett to focus on the negative impact he said Barrett could have on efforts to implement stronger gun control measures.

“The stories I tell will focus on the real-life impacts of her extreme radical ideological-driven approach to the Second Amendment and what it would mean in shifting the center of the court radically right,” Blumenthal said.

The Democratic vice presidential nominee will have a historic opportunity to question a Supreme Court nominee while on the ticket of a major political party.

Harris has said Barrett could “undo” the life’s work of Ginsburg.

“President Trump and his party and Judge Barrett will overturn the Affordable Care Act, and they won’t stop there. They have made clear that they want to overturn Roe v. Wade, and restrict reproductive rights and freedoms,” Harris said recently in North Carolina.

“Judge Barrett has a long record of opposing abortion and reproductive rights. There is no other issue that so disrespects and dishonors the work of Justice Ginsburg’s life, than undoing the seminal decision in the court’s history that made it clear — a woman has a right to make decisions about her own body,” Harris said.

In her prepared opening remarks, however, Barrett offered praise for Ginsburg.

“I have been nominated to fill Justice Ginsburg’s seat, but no one will ever take her place,” Barrett wrote in the statement. “I will be forever grateful for the path she marked and the life she led.”

Even as they strategize, Democrats concede they lack any meaningful procedural tools to delay Barrett’s nomination from moving forward.

At a press conference Sunday, Minority Leader Chuck Schumer said that Democrats will “not supply the quorum” necessary for the Judiciary committee to vote on Barrett’s nomination. The rules require that at least two members of the minority be present for a vote, but GOP aides told ABC News that Graham can wave the rules, which he is expected to do.

GOP Sens. Lisa Murkowski of Alaska and Susan Collins of Maine, have said they will oppose any nomination before the election, siding with the position of most Democrats that the Senate should wait to consider the next justice.

Two other Republicans would need to join with Murkowski, Collins and the rest of the Democratic caucus to vote down the nomination.

That is highly unlikely, and other Republicans in the days since Barrett’s nomination have been outspoken in their support for her conservative judicial philosophy.

“The president has picked the single-best person in the country to succeed the late Justice Ruth Bader Ginsburg,” McConnell said. “This is a woman of extraordinary accomplishment.”

Sen. Josh Hawley, R-Mo., has for months said he will not support a nominee who does not believe Roe v. Wade, the landmark abortion rights case, was wrongly decided.

Hawley has not yet said whether he intends to ask Barrett about the case during her committee questioning, but he spoke with her on the matter when the two met earlier this month.

“I have every confidence she meets my threshold she’s been very clear,” Hawley said. “She clearly meets that threshold.”

A spokesperson for Sen. Charles Grassley, R-Iowa, told ABC News that Grassley intends to focus his questioning on Barrett’s understanding of the role of a judge within the larger government system, as well as her judicial philosophy.

An aide said Republican Sen. Marsha Blackburn of Tennessee is interested in understanding Barrett’s commitments to interpreting the Constitution as written, as well as issues of executive overreach.

Blackburn and her colleague, Sen. John Kennedy of Louisiana, have said they have been spending time since Barrett’s nomination reading through her previous decisions and writings to better understand Barrett’s thinking.

Coons said that the rapid pace of Barrett’s confirmation process has made it nearly impossible for him to get through all the material he’d like to review ahead of the hearing.