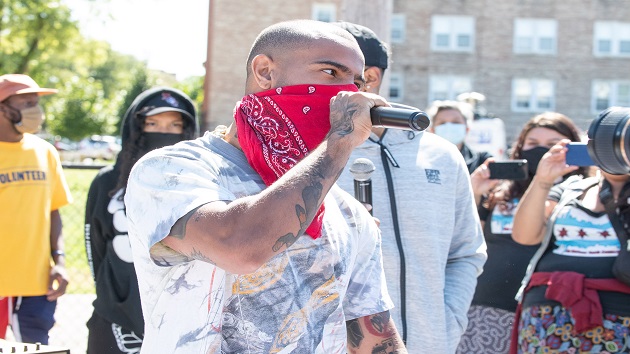 Hip-hop activism has been on the rise again over the past few months and while each new song is unique, top protest anthems show that hip-hop artists are generally not caught in the fray of presidential politics.

Treva Lindsey, a professor at Ohio State University whose expertise includes Black popular culture and hip-hop studies, said that artists “keeping their eye on the ball” in 2020 is consistent with the fact that historically there isn’t a “large body” of “direct critiques of presidents” in hip-hop because the genre has “always been preoccupied with the conditions and the system.”

Pointing to the fact that police brutality, non-indictments and non-convictions of police officers who kill unarmed Black men and women occurred under every administration, Lindsey said that while responses from presidents like Barack Obama may be “better than what we’ve seen with Trump,” these systemic injustices are “not singular to any particular president.”

And in the throes of a chaotic race, artists are looking beyond the day-to-day drama of 2020 by focusing on the bigger picture.

In fact, “The Bigger Picture” is the title of what is arguably the most popular protest anthem of 2020 — a reflective song by Atlanta rapper Lil Baby, who wrote it in the wake of national outrage over the May 25 police killing of George Floyd in Minneapolis, Minnesota.

The images of a police officer kneeling on Floyd’s neck for more than eight minutes as the Minnesota man called out that he couldn’t breathe sparked national and global outrage, revitalizing civil rights protests in every U.S. state and energizing the Black Lives Matter movement.

Lil Baby addresses the systemic racism driving the generational fight for social injustice in the song’s chorus: “It’s bigger than black and white/ It’s a problem with the whole way of life/ It can’t change overnight/ But we gotta start somewhere/ Might as well gon’ ‘head start here.”

While the hip-hop community has been fervent in its rejection of Trump and generally lukewarm in embracing the Biden-Harris ticket, artists are channeling their musical messaging and lyrical prowess to address systemic racism that has plagued Black America for generations — a force that existed centuries before Trump and will continue to exist whether the president is voted out in November or whether he serves another four years.

The newest project — an album curated by Roc Nation — is the latest example of how artists are staying on message.

“Hip-hop was born out of a need for social commentary in music. Young voices emerged from the inner cities to combat injustice through music,” California rapper D Smoke, who is featured on the album, told ABC News. “That is rap’s origin and projects like ‘Reprise’ take hip-hop back to its roots, speaking for justice.”

“Reprise,” which was released on Friday, is a collection of 11 protest songs exploring social justice issues like police brutality, and features contributions from artists including Vic Mensa and Rapsody. According to Roc Nation, a portion of proceeds will be donated to various organizations that support victims of police brutality, hate crimes, and other civil rights violations.

“I’m compelled to support this project and a company that isn’t just about business, but culture and community first,” Grammy-nominated rapper Rapsody, whose song “21 Problems” is part of the project, told ABC News. “Music has always been the voice of the voiceless and soundtrack to movements. In lending our voices, we not only get to inspire, heal, and motivate through the art, but also support organizations that are directly impacting change in the physical, boots on the ground.”

While reflecting on the new music, multiple artists noted the cyclical nature of racism.

“I first started the song ‘No More Teardrops’ in 2016 amidst the unrest surrounding police murder; at the time it was specifically Alton Sterling who had been killed in Baton Rouge,” Chicago rapper Vic Mensa told ABC News. “I went down there with Malik Yusef for his funeral and I iPhone-recorded a band on the street playing what would become the basis of the song. When the ‘Reprise’ album was presented to me, I went back to the song and rewrote new verses, as well as added Wyatt [Waddell]. I think it’s revelatory how little has changed in four years.”

Jason Evigan, who recorded “Second Line,” featuring Sebastian Kole, for “Reprise” said that they first wrote the song in the wake of the police brutality protests in Ferguson, Missouri, which were sparked by the fatal police shooting of teenager Michael Brown.

“It’s heartbreaking to know that several years later, we are still dealing with the same injustices and the song is as relevant as ever,” he added.

Meanwhile, singer-songwriter Ambré, said that she wrote “Revolution” in the beginning of 2018 in response to another case of police brutality.

“I felt tired, angry, and a little afraid,” she told ABC News. “Writing that brought me into a sort of peace of mind. It was like a pep talk to myself; me trying to give myself hope to fight, to not get too tired. It’s a shame that things have not gotten much better since then … the simple fact is that justice is a human right.”

Top hip-hop protest songs released since Trump took office in 2017 have varied in tone, but the focus on systemic racism is consistent.

Some popular examples include “The Story of O.J.” by Jay Z, “This is America” by Donald Glover, “Street Livin"” by The Black Eyed Peas, “Cops Shot The Kid” by Nas, “Americans” by Janelle Monae, and most recently, Meek Mill’s “Otherside of America,” T.I. and Nasty C’s “They Don’t,” Tee Grizzley’s “Mr. Officer” and Master P’s “Say Her Name,” which is dedicated to Breonna Taylor — an unarmed 26-year-old Black woman who was shot and killed by police in her Louisville, Kentucky, apartment on March 13, 2020.

“Hip-hop smartly is concerned with the systems, the conditions and recognizes this as part of the American project that is so deeply flawed and failed,” Lindsey said, reflecting on the music. “The leader or the figurehead of that is merely the person managing that system. Some manage it better than others, some manage it more horrifically than others or more humanely than others. But at the end of the day, they are there to maintain this project that hip-hop is largely talking about as a failed project.”

Even Compton rapper YG, who released “FDT,” or “F— Donald Trump” in 2016 — an explosive anti-Trump anthem that went viral and became a defining protest song of the 2016 election, has maintained his focus on the bigger picture.

In 2020, as President Trump and Biden face off amid the largest civil rights movement in American history, YG, who had teased the possibility of a sequel to “FDT” in 2019, released a bombastic anti-police brutality anthem in June titled “FTP,” which stands for “F— the police,” echoing N.W.A.’s historic 1988 song.

“FTP” does not mention Trump or Biden, but unapologetically tackles an issue that has plagued Black Americans for generations. The black and white video, which opens with the Martin Luther King, Jr. quote, “a riot is the language of the unheard,” was filmed during a massive “Black Lives Matter” protest in Los Angeles in June.

Some critics took issue with lyrics like “Buy a Glock, break down the block,” which appears to encourage violence, but the rapper pushed back, pointing to the peaceful protest he helped organize in Hollywood.

“See you gotta understand that a lot of people out there they see me as a N. They don’t see the black proud man. They see a kid from bompton and they expect violence. They hear FTP & they think I’m gonna come and burn my city. So we showed up and did it right. We proved them wrong,” he wrote in a series of tweets. “The real story here is me and Black Lives Matter brought out 50,000 people today to peacefully protest and unite for change.”