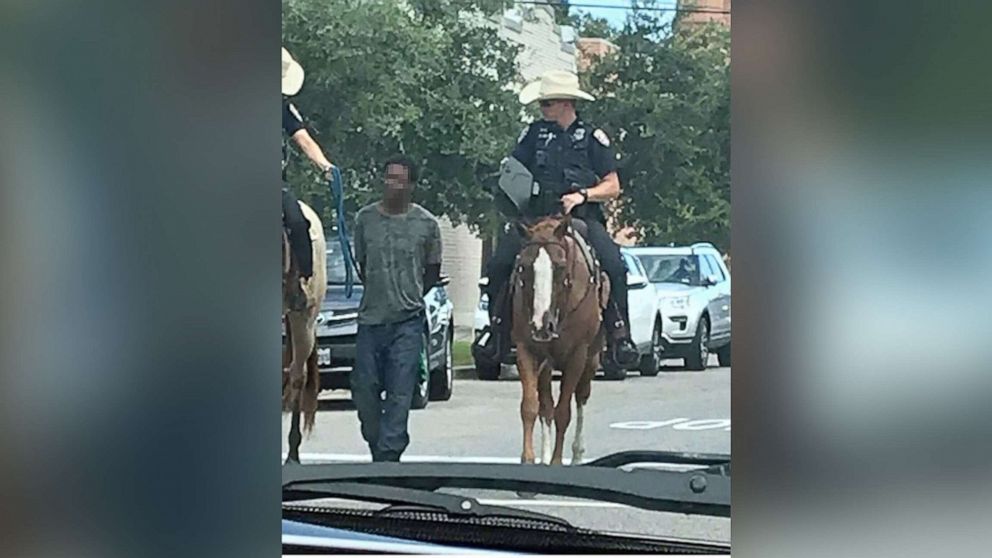 (GALVESTON, Texas) — A Black man who was led by mounted police down a Texas street while bound with a rope last year is suing the city and its police department for $1 million, court documents show.

In August 2019, Donald Neely was arrested on criminal trespass charges in Galveston, just outside of Houston. Images and video of his arrest, during which two white police officers led him down the street handcuffed with a rope tied to their horses, sparked outrage.

A petition filed this week in Galveston County’s district court called the officers’ conduct “extreme and outrageous” and claimed that it caused Neely injury, emotional distress and mental anguish.

“Neely suffered from handcuff abrasions, suffered from the heat, and suffered from embarrassment, humiliation and fear as he was led by rope and mounted officers down the city street,” the lawsuit claims.

The lawsuit charges that the arresting officers should have realized that Neely “being led with a rope and by mounted officers down a city street as though he was a slave, would find this contact offensive.”

The lawsuit is also alleging malicious prosecution over Neely’s criminal trespass charge, which was ultimately dismissed in court.

A Galveston spokesperson told ABC News the city does not comment on pending litigation.

A status conference is currently scheduled for Jan. 7, 2021. Neely is demanding a trial by jury, court records show.

Galveston Police Chief Vernon L. Hale III issued an apology in the aftermath of the arrest on behalf of the department, saying the officers “showed poor judgment.” The department said at the time it would cease the use of mounted horses to transport a person under arrest.

A subsequent investigation by the Texas Ranger Division of the Texas Department of Public Safety determined the arrest didn’t warrant a criminal investigation.

Following that investigation, the department released body camera footage of the incident. In it, the officers can be heard acknowledging the optics of the scene.

“This is going to look so bad. I’m glad you’re not embarrassed, Mr. Neely,” one of the officers is heard saying.