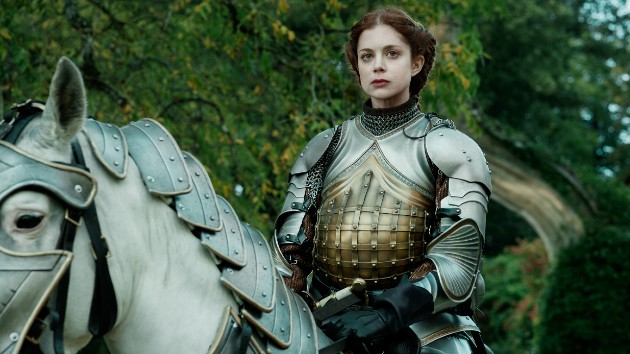 Star Charlotte Hope tells ABC Audio putting on that “maternity armor” and shooting that scene was just as empowering as it looked.

“I think it was like the most empowered I felt maybe in my whole life,” Hope recalls. “I remember walking down the stairs, getting on this horse, and I was so pumped with adrenaline because I knew I had to get the scene in one [take], basically.”

She adds, “I’m a very, very small person, so to get to feel that strong and powerful is very satisfying.”

Hope says she also relished playing out the demise of Queen Catherine’s marriage to King Henry VIII, played by Ruairi O’Connor — a story we all know from the history books. She says it was important to show the couple still had “that fight and that fire” all the way up until the end.

Who gets the vaccine first and who decides? 3 things to know about tomorrow’s CDC committee meeting
Star Wars’ newest villain, ‘The Mandalorian’ star Giancarlo Eposito, “really adored” Darth Vader
The Jerky Boys are back, and just when we can use a laugh
Meet the ICU doctor who is going viral for embracing a COVID-19 patient
Anne Hathaway shrugs off ‘The Witches’ comparisons to Anjelica Huston
‘Pandemic’ is named as 2020’s Word of the Year by Merriam-Webster