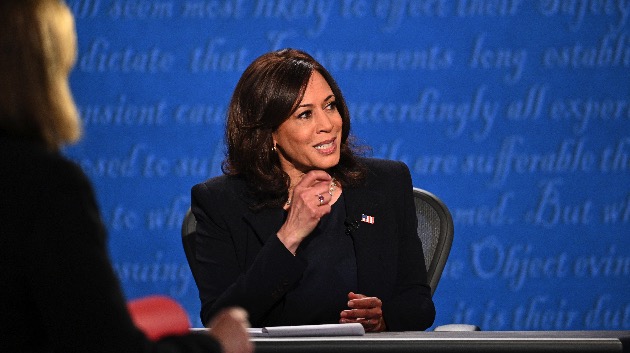 (WASHINGTON) — President Donald Trump on Thursday attacked Sen. Kamala Harris as “a monster” the day after the vice presidential debate.

“This monster that was on stage with Mike Pence, who destroyed her last night by the way, but this monster, she says no no there won’t be fracking, everything she said is a lie,” Trump said in an interview with Fox Business anchor Maria Bartiromo.

He went on to call her “horrible,” “totally unlikeable,” and, falsely, a “communist.”

This is not the first time the president has launched baseless attacks against Harris since she became the Democratic vice presidential candidate.

He’s called her “incompetent,” a “super liberal,” and has painted a dark picture to his supporters of a what would happen if Harris had to take over as president.

At a September rally in Fayetteville, North Carolina, Trump fabricated a White House conversation where a President Joe Biden was forced to sign documents he didn’t understand.

He mimicked Biden saying: “I’m getting tired. I’d like to rest. I’d like to let Kamala take over as president!”

“That’s no way to get into the office, because we’re going to have a woman president someday, but you know what? It can’t be Kamala,” Trump said.

“Never!” a person in the crowd screamed.