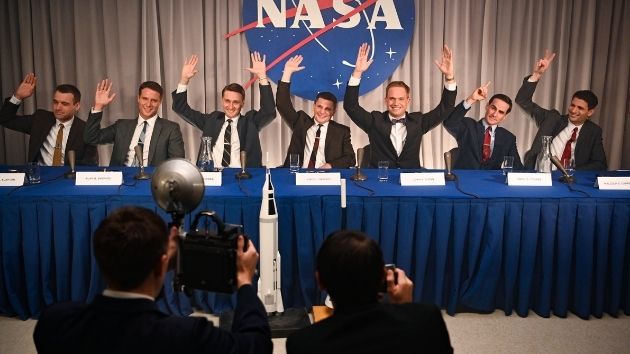 (LOS ANGELES) — The Right Stuff takes flight on Disney+ Friday, inspired by Tom Wolfe’s bestselling novel about the original Mercury 7 astronauts, the early days of the Space Program and NASA. Although much is already known about this heroic and brave group, there is also still much to learn.

Patrick J. Adams, who plays pioneering astronaut John Glenn in the series, told ABC Audio that thanks to his research, he discovered a side to the American hero that many didn’t know about — a penchant for poetry — which was handwritten in journals.

Additionally, Nora Zehetner who portrays Annie Glenn — John’s wife, who struggled with stuttering — explains that the impact and message of Annie’s story shouldn’t be lost to us today.

“She went around the country giving speeches and helping people and I thought it was really interesting, it’s been really interesting watching Joe Biden,” she begins. “He had an incredibly bad stutter… And you have the President of the United States making fun of Biden’s stutter.”

“I can’t imagine what she went through and the fact that she persevered and she pushed past it, because she was the woman that she was, you know?” Zehetner concludes.

While all of the astronauts played instrumental parts in getting the U.S. into space, Gus Grissom — an astronaut who died in 1967 after a fire broke out in the capsule during a pre-launch test for the Apollo 1 mission, was described as “a different cut.”

Michael Trotte, who plays Grissom, told ABC Audio, “If not for Gus’s sacrifice, we don’t go to the moon.”

The Right Stuff may be premiering decades after the original events occurred, but, Executive Producer Jennifer Davisson says that the production team strived for “authenticity” in recreating the era.  (AUDIO IS ABC 1-ON-1)

The Right Stuff debuts on Disney+ this Friday October 9.

Denver Broncos the latest NFL team hampered by coronavirus
New storm system to travel across the South this weekend
Black Friday 2020: Tips on the best deals to look out for
Michael Jordan donates $2M of proceeds from “The Last Dance” to food banks
George Floyd’s brothers on the fight for justice, remembering him on Thanksgiving
Coronavirus updates: TSA screens record number of travelers since pandemic began