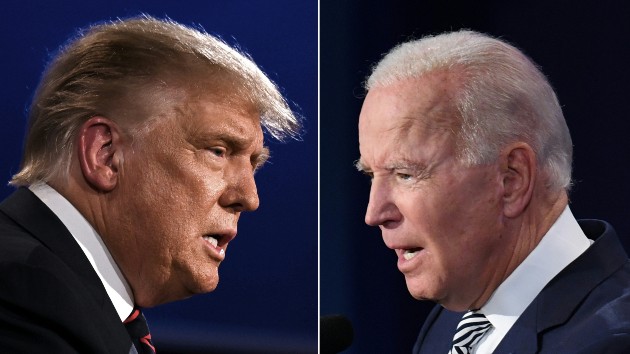 (WASHINGTON) — The Commission on Presidential Debates announced Thursday morning that the second debate between former Vice President Joe Biden and President Donald Trump will be virtual.

However, shortly after the change was announced, Trump said he would refuse to participate in an interview with FOX Business.

The Biden campaign said Thursday morning that the former vice president will participate in the virtual event.

“Vice President Biden looks forward to speaking directly to the American people and comparing his plan for bringing the country together and building back better with Donald Trump’s failed leadership on the coronavirus that has thrown the strong economy he inherited into the worst downturn since the Great Depression,” the campaign said.

The scheduled town hall format will remain for the Oct. 15 debate, but CPD said “in order to protect the health and safety of all involved,” the candidates would participate remotely from separate locations.

Questioners will still be with moderator Steve Scully at the Adrienne Arsht Center for the Performing Arts in Miami, Florida, as previously planned.

Trump told Fox he was not made aware of the changes before they were announced.

The safety of the next debate came into question after Trump’s positive COVID-19 diagnoses last week, which required the president to be hospitalized at Walter Reed Medical Center. Trump returned to the White House on Monday.